There were a lot of new video games and related materials announced at CES, here are the interesting ones that we saw.

For the heavy computer gamer: If you are a heavy computer gamer then CES was a good week for you. Three of the top gaming computer makers announced pretty cool new products. We’ll start this list with Alienware who announced a very nice new gaming computer screen. This is not the average screen you have at your home computer, rather its a monster curved gaming screen. This screen has a resolution 2880 x 900 (for those who don’t know what that means, let’s just say it will play you video games in very nice quality), and is over 3 feet wide. It is not out yet but is listed for the second half of this year for price unknown as of now (start saving now- this will most likely cost a lot). 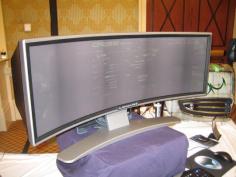 Dell and Gateway also announced new products but theirs are more of actual machines and not just screens. Dell announced a new additions to its high end XPS desktops and laptops, the XPS 630 and something that is not for sure set in stone (only prototype) 16 inch laptop. Not much is known on the desktop other than it will be as Dell puts it “middleweight contender with heavyweight power”, as in it is small in size but still as powerful as bigger desktops like Dell’s own XPS 720. The laptop on the other hand is something that is not your ordinary in terms of screen size. This laptop, though still only a prototype, is a 16 inch laptop that offers Full HD screen quality along with what looks like to be similar specs as that of other XPS laptops, like the smaller 15.4 inch M1530. Since this is still a prototype and is not even a sure deal to be released to the world we don’t know when it will be released and for how much.

Gateway also announced a new high-end gaming desktop, the FX7020. This is also a very powerful desktop that is also moderately priced considering the power inside this machine, and the premium payed for getting a gaming machine. It is loaded in terms of specifications and includes a top of the line processor and graphics card capable of handling all the intense games you want to play. The price on this system is starting between $1,000 and $1,500 depending on the model you chose (as with the Dells, you can customize some of the features on the base model either raising them for power or lowering them for price).

For real console style (Xbox 360, PS3, Wii) gamers there was things available for you as well at CES. For the Wii there was a new accsory from Nyko that would allow for Wii users to use the Nunchuk controller wirelessly as well instead of having it attached to main Wii controller through a wire. It works the same as the regular original Nunchuck, and according to Ebgames.com, will be available April 7th for around $35. Nyko also announced they would selling their own controllers for the Xbox 360 and PS3, this is good because it is an alteritive in case you are not happy with the controllers that those 2 systems come with. These controllers also add some interesting things to your gaming experience including backlit buttons, a new design, and for the PS3 rumble support. According to Nyko’s website the PS3 version is coming in March, and we assume that an Xbox 360 version should be out also at around that time.

For those of you who want to know more about new video game products announced at CES click here.