← Nintendo DSi in Stores April?
Is this the T-Mobile G2? →

Well our finals are finally over, so it’s time for us to get back to “work”. A lot of things happened at CES, and we hope to give you info on the best netbooks, laptops and desktops (aka. regular computers), cell phones, as well as some general cool things we saw  happen.

Let’s start with netbooks, and boy were there A LOT of these. HP, Dell, Asus (the guys who really started the netbook frenzy with their Eee PC line), and a bunch of other companies all came out with some new stuff, so read on for some of the best you should look to see in 2009!

Before we really begin, we’re not gonna put Sony’s new Vaio P (which we wrote about here) into this category, as 1) Sony considers it to be a “ultra-portable” laptop and not a netbook. 2) It costs more than buying 2 of most netbooks, which really gets rid of the netbook idea as a small, low cost (and by this we mean well below a starting price of $900) mini laptops. Now let’s begin.

Here are our top 5 netbooks  that came out of CES:

1. Dell Inspiron Mini 10– This is a netbook that I personally am looking forward to seeing (I hope to buy a netbook for taking to school everyday since my current laptop is way too big 🙂 ). The Dell called this a “perfect 10” and after looking at some pix of it, I think it may very well be. For one, this thing is loaded with:

Unfortunately, Dell didn’t share some of the real important info like pricing and release date, though we  would expect it to come out within the next few months (or so we hope…). But assuming this does come out soon and at a normal price (between $300 and $600 like most netbooks), Dell could have a real winner on their hands.

2. HP 2140– This is an update to one of HP’s netbooks- the Mini 2100, and really bring some nice updates to the line. These updates include:

This netbook is expected to come out later this month at a not too bad starting price of $499,  but until then you can check it out at HP’s site here.

This is a very cool netbook, definitely different from those mentioned above. So what’s so different? Well, unlike the other, more traditional netbooks from Dell, HP and others, Asus is actually completely changing the netbook game yet again (these guys started the netbook craze as we mentioned above), by putting a 10 inch touchscreen onto the laptop. Oh, and not only is it a touchscreen, but a multi-touch touchscreen that is a tablet which swivels around 180 degrees! Other features we know include:

Not many other features, nor the pricing and release date, are known, but this is definitely a nice lil’ netbook — especially when Microsoft comes out with Windows 7, including  better touchscreen capabilities (we’ll cover Windows 7 in a later post). 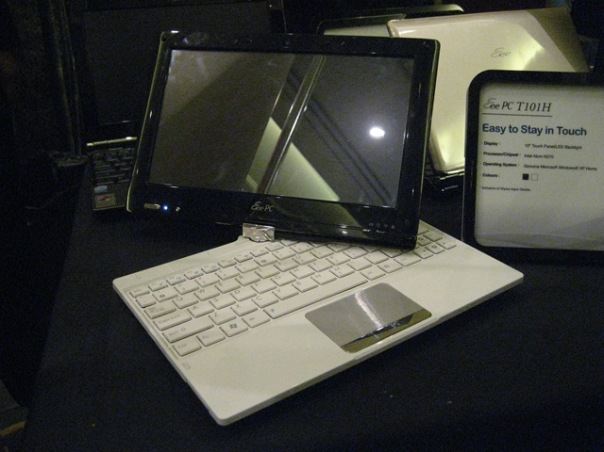 Again not too many details on this one (especially pricing or release date), but this should be a really interesting choice as you could either go with the bigger screen’d T101 or with the GPS and TV filled T91. Regardless, let’s hope Asus gets both of these out soon and at reasonable prices.

5. Asus S121– Asus really had a lot of interesting netbooks at CES, which is why we’re focusing so much on them. The S121 is a little bit different than the Eee line we mentioned above, as it is usually much more stylish, high powered netbook, but also more expensive. This little guy really looks to push the netbook limit and is something I would consider as a regular, ultra portable PC like the Sony Vaio P (even though this has a 3 inch bigger screen). Why do I say this? Well the specs on this include:

This also has “CRYSTALLIZEDTM – Swarovski Elements masterfully imbedded into intricately crafted metallic hinges add a touch of class, reminiscent of a pair of marquis-cut diamond cuff-links on a business suit….” and “a luxurious and elegant leather palm rest” (their words not ours 🙂 ). Expect to come later this month for who knows how much 😉

Well there you have it, some interesting netbooks from CES. These are the few we thought you should look out for as they look to be really cool, and we’ll of course keep you updated on these netbooks.

In the meantime, we wanna know what are your thoughts: you like/dislike the 5 we chose, have a different netbook that caught your eye? Let us know in the comments.

← Nintendo DSi in Stores April?
Is this the T-Mobile G2? →