Is this the T-Mobile G2? 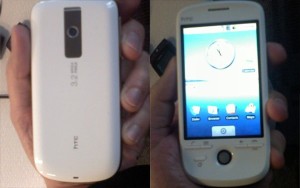 Well pix are out now on the internet of T-Mobile’s next possible version of  Google’s Android powered T-Mobile G1 (to learn about the original G1, see our previous posts here). The pix show a whole new design with no annoying “chin” for the trackball, and instead has the trackball built straight on the device (Finally! That “chin” must be really annoying to use for texting).

There also appears to be different forms of buttons underneath the screen, a 3.2 megapixel camera, and what is arguably the biggest design change– no physical keyboard. Yup, the G2 looks to drop one of it’s biggest feature in order to get a thinner design. Oh, and as of right now that would be a pretty big problem as Android doesn’t have a virtual keyboard like the iPhone. Don’t worry though possible G2 owners, we fully expect Android to have an official virtual keyboard well before this thing comes to it’s rumored launch in May 🙂

I personally don’t find the new G2 design to be so great, as the smaller buttons and new design just look plain ugly to me (at least from this shot), especially when compared to phones like the iPhone, Blackberry Storm and Bold, and I even think it looks worse then the original G1 (which I didn’t think was so bad to begin with, minus the whole “chin”). Though, a bunch of awesome features would make that feeling go away pretty quickly 😉 (you know, an awesome, possibly even multi-touch touchscreen, a normal 3.5 mm headphone jack instead of the current “do all USB port” on the G1 would be some good starts).

Again all this is just a rumored device, as neither T-Mobile, HTC (the makers of the phone as well as the G1), or Google have said anything. But hey, assuming this is the G2, what features would you like to see in this phone? Do you like the new design, even if it means losing the keyboard? G1 owners, you like/dislike your G1, and would you reccomend the G1, or that people wait for the G2 to come out? Sound off in the comments.

Info and pix from Engadget.com