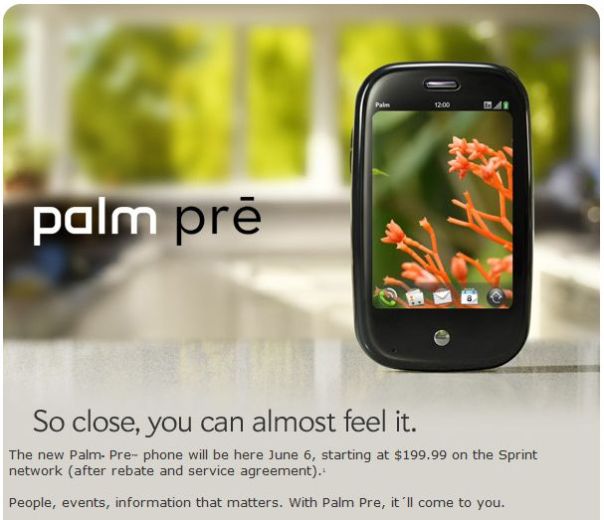 Well, after months and months of waiting, Palm and Sprint have finally announced today the availability of their savior phone– the Palm Pre.

The details? Launch is on Saturday June 6th (which just so happens to be 2 days before Apple’s WWDC conference where they are rumored to bring out a new iPhone– that should be fun) and will cost $199 with a 2 year contract and after an $100 mail in rebate. Unlike by the iPhone and iPhone 3G– where you could only buy the phone from either Apple or AT&T — Palm and Sprint will be selling this at a bunch of locations including their own Palm and Sprint stores, Best Buy, Radio Shack, and even a few Wal-Mart stores, which means there are plenty of places for you to find one (oh, and definetly go to Best Buy first– they’re selling the phone for just $199.99, with no $100 mail in rebate needed. This is much better and easier than the other stores where you’ll need to pay $299.99 in the store and then send in the mail in rebate, wait a couple of weeks, and then get the $100 back).

For info of the Pre’s specs, or to see why we’re so pumped about this phone, see our previous post here.

The cool, Touchstone dock for the Pre— which lets you just place the phone on a little magnetic circle to charge instead of plugging in a cable, will also be available on the 6th for $69.99 and will come with the $49.99 dock and a $19.99 back for the Pre that allows the magnets to connect (the standard back of the Pre won’t work with the magnets, so you would need to swap it for this one).

Otherwise nothing else new on their part– like an announcement on if it will have 4G— but at least we know when we can pick one up.

You can find the full press release here.

Posted on May 19, 2009, in Cell Phones and tagged Cell Phone, palm, palm pre, Sprint. Bookmark the permalink. Leave a comment.