← AT&T and T-Mobile Release Details on 2 New Phones for Each
New iPod Touch and iPod Nano Designs Leaked? Are Both Adding Cameras? →

It’s July 22nd, and the next version of the awesome Madden franchise — Madden NFL 10 — is expected to drop in about 3 weeks (August 14th). Therefore, you Madden fans out there are begging for the newest features absent from its predeccesor, Madden 09. (However, if your are a true Madden die-hard as I am, you’ll be running home with the latest version anyway). To settle your anticipation, we present to you not the minor updates for basics and rosters, but some of the major updates for the Xbox 360 and PS3 models (updates for the PSP/PS2 and the DS/Wii versions will be posted in the next few days): new cameras, customizable gameplay, Pro-Talk, updates in both gameplay graphics and online play. Curious for more? Go for it– no extra charge.

Unlike 2009’s Madden’s more noticible updates (like the new Madden IQ, better commentary etc., as covered in our review here), Madden 10’s are more “under the hood” updates. 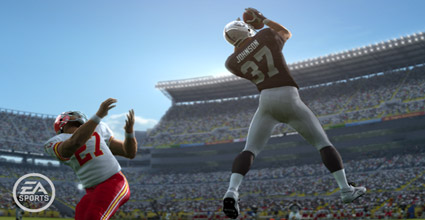 A clip from the new Madden 10 cameras

Moving the pile in Madden 10

So that’s the updates to Madden 10 for the 360 and PS3 versions. Over the next couple of days we’ll cover the PSP/PS2 version as well as the DS/Wii versions, but in the meantime– what do you think of the new game and, if you’re a 360 or PS3 owner, are you gonna go pick it up on August 14th (Me? As a 360 owner and NFL die hard fan, I’m looking forward to picking this up on the 14th, but honestly, I can’t wait to see what happens in Madden 11 with Project Natal!)? Sound off with your thoughts in the comments.

← AT&T and T-Mobile Release Details on 2 New Phones for Each
New iPod Touch and iPod Nano Designs Leaked? Are Both Adding Cameras? →