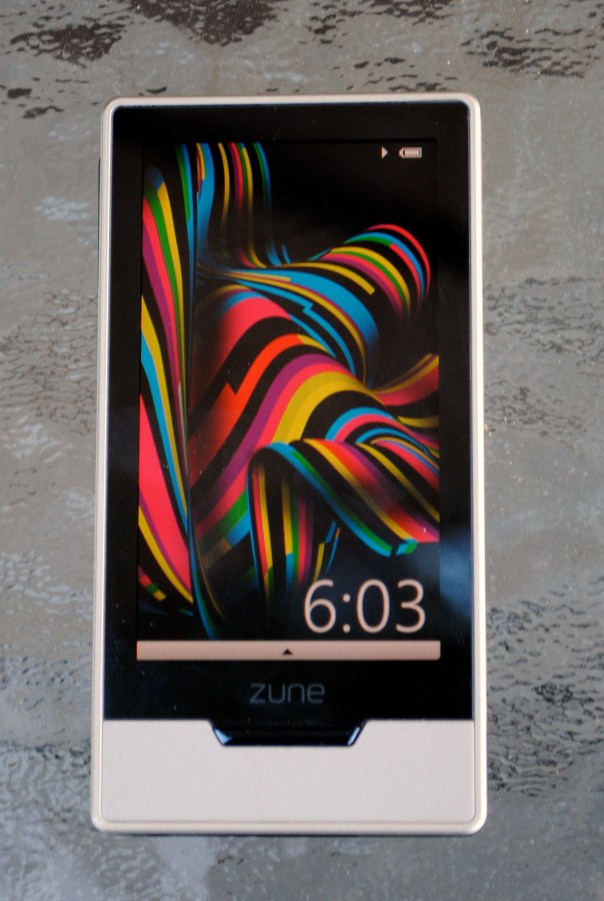 For the last week or so we were able to spend some good ‘ol time with Microsoft’s sweet new Zune HD. It really is a slick device– OLED multi-touch 3.3 inch touchscreen with amazing display (thanks to NVIDIA Tegra graphics), sleek design, thin aluminum casing, built in WiFi, and of course, the HD features of HD radio and the ability to play your videos in HD with the optional HD playback kit.

So if your looking for a new device and have to choose between say, this and the iPod touch 3rd gen, which should you go with? The answer, my friends, is after the break.

As we all know, Apple didn’t really change the iPod touch’s design– really at all–in their new fall iPod refresh. No new camera like the Nano, no built in mic– same old machine just with a slightly bigger battery and bigger storage options.

The Zune HD on the other hand, well that is a WHOLE different story. Ever since it first was announced, the Zune HD seemed to be a beautifully designed device. And after playing with it the past week– I cannot agree more. It’s thin, feels great when you hold it, extremely light and easy to take around, and well, just awesome looking. It all around just looks fantastic, in my opinion as nice or even possibly better than the iPod touch (which let’s be honest– as nice as it is–hasn’t really changed that much since it first got announced back in 2007).

However, some dedicated volume keys on the side of the device like the iPod would be helpful: I constantly needed to push the same side button–shaped like a volume rocker– to access all my playback and quickplay controls (i.e. play/pause, fast forward, rewind and volume, and so on). Also, because you need to use the touchscreen to manipulate these controls, you can’t simply skip a song or raise the volume, for example, while its in your pocket.

Overall, the Zune HD is a big step up from the previous 2 generations of Zune, and something we definitely look forward to see more of in upcoming Zune devices. 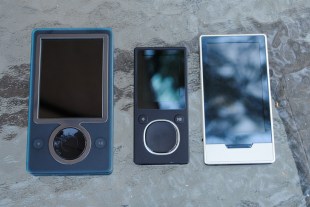 The 3 generations of Zune– wow, have they gotten A LOT better with age

Ok, now let’s move on to the UI and software found on the Zune HD itself. Microsoft again took an interesting approach to the Zune HD here as well. You see, unlike the iPod touch which is like a pocket computer, the Zune HD is designed to be more of a great media device as Microsoft puts it. Yes you get apps– such as for right now some games like Hexic and Texas Hold’em as well as a calculator and weather app, with some more apps like Project Gotham Racing 3, Facebook and Twitter on the way by the end of the year; but Microsoft has not announced any real plans for an app store, and instead is working either in house or with select groups to make apps for the Zune HD and rolling them out as they see fit. Apps are also ad supported, meaning when you open up say, Texas Hold’em, you’ll be greeted with a brief 15-30 second ad. When I spoke with a Zune rep they said this is just to keep games free and will not be used in the calculator and other utility apps. It’s annoying but if it means I don’t have to pay money for games, I’m willing to deal with it.

In short, your not gonna buy this for the ability to download 75,000+ apps like you would an iPod touch.

Texas Hold’em on the Zune HD

Same goes for the web browser. While the web browser is great, and something we hope is brought to Windows Mobile ASAP to replace the standard version of mobile Internet Explorer (which is currently pretty pathetic in comparison), don’t expect the Zune HD to give you the same web browsing experience as the iPod touch. You get favorites, multi-touch pinch to zoom and the like, but no tabs or history– and while it loads pages extremely well and is easy to navigate, it’s still no mobile Safari. The focus here is the media. 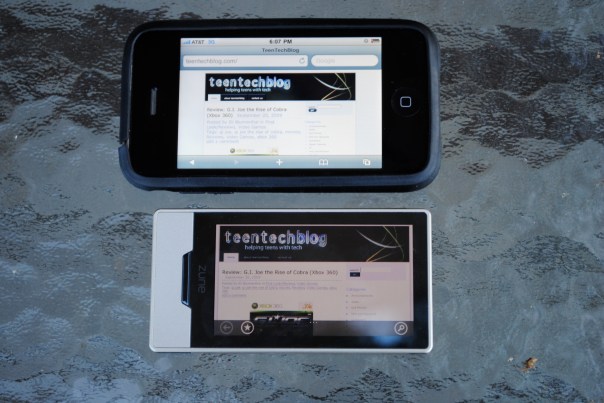 And the media really is a place where the Zune HD shines. The experience is great. Music sounds great, video and pix look fantastic on the widescreen 16:9 format the Zune is designed in, and navigation also is pretty great. The menus take a little getting used to, but the learning curve is really quick (what should help– to back out of menus, you just tap the big letters are the top of the screen). Your music, movies and pix are all stored in simple, easy ways to navigate and there are also some really cool features in the music playback as well. For example, when connected to the internet, it automatically finds and displays things like bio information about the artist, related artists, and pix when in the artists page. Pretty cool. 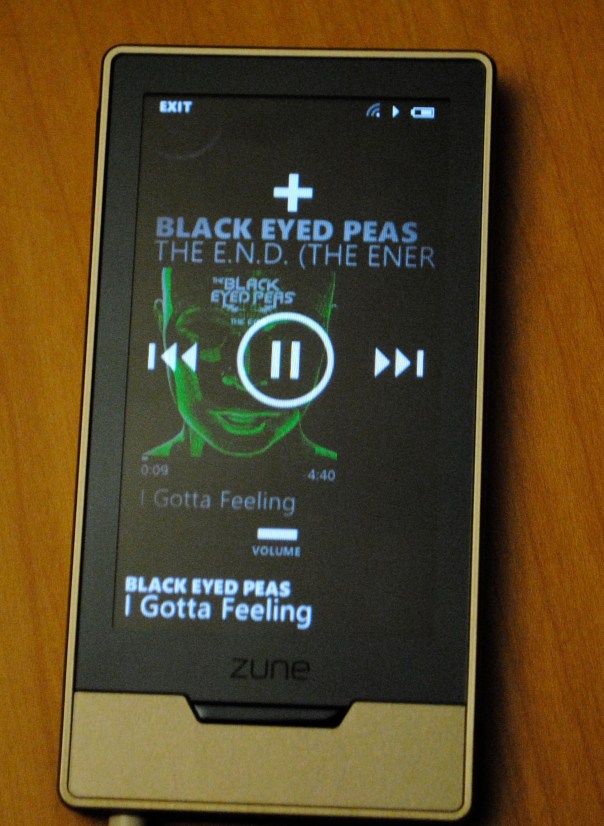 Another great feature, called Pins, appears on the left side of your homescreen and displays your recently opened and favorite sites, recently opened apps, and recently added music and pix. Oh, and all your recently added music are automatically put into a “new” playlist, a little detail I happen to love; I sometimes forget some of the new songs I add to my iPod and it really annoys me because, well, I wanted to listen to it and can’t find it– this should definitely help with that problem.

There is also a built in HD and FM radio (HD radio being higher quality, better sounding radio), a great battery (listed at around 33 hours of music playback with WiFi off, or 8.5 hours of video), as well as the ability to sync your Zune wirelessly with your PC over WiFi, though when I tested the Zune HD out, I didn’t get a good chance to fully test these out. Two downsides with the Zune HD’s media playback– unlike the iPod touch: there’s no built in speaker for playing without headphones, and no Bluetooth for using with wireless headphones.

Ok, now that the device is covered, let’s move to the Zune desktop software.

This is Microsoft’s answer to iTunes, and like the Zune HD itself, it answers iTunes in a big way. Just like you get smart playlists in iTunes called Genius and Genius Mixes, you get them in the Zune as well in the form of Smart DJ’s. Microsoft takes it one step further though: if you purchase their $15-per-month Zune Pass music subscription service (where you get  unlimited access to all music on the Zune Marketplace with the ability to keep 10 songs each month whether or not you keep the Zune Pass) it’ll search the Marketplace while your listening and play the songs it thinks you might like.

Again, pretty sweet, and the Zune Pass is a definite selling point of the Zune experience. You can even use Zune Pass right from the Marketplace app on the Zune HD to download songs, charts, and albums straight to your Zune (again assuming you got WiFi). And I love the ability to not just download all the music I want for $15 a month, but that I can even keep 10 of the songs FOREVER each month as well. As of now, Apple doesn’t offer a subscription model like this (sad but true), so if you download a ton of music each month or like the ability to download all the music you want without racking up a huge bill, you should definitely look Zune in this department.

The Zune Software also offers things like Mixview, which is a cooler version of Cover Flow, and its Zune Marketplace functions similar to the iTunes store, oh, and then of course we got this HD part of the device.

So you got a Zune HD, the Zune Software for your PC (sorry any Mac owners into this device– Zune only works PC. Why Microsoft doesn’t release a Mac version of the software I don’t know), and an Xbox 360. Say you buy a movie on your PC, and then transfer to your Zune, but also want to be able to watch it off your 360 on the HDTV. No worries, seeing as how the Zune Marketplace is now also on the 360, you just go to the movie on the 360, log in with your account and download (or stream) in AMAZING 1080P. Don’t worry about being charged double– its all part of Microsoft’s “3 screen system” and in my opinion is a pretty solid idea. If you’d rather just play your video off the Zune rather than redownloading to a 360– you can do that too, either by connecting your Zune to the 360 or buying the $90 HD dock (which works pretty nicely as well– presenting everything from menus to video in great, clear 720P HD). 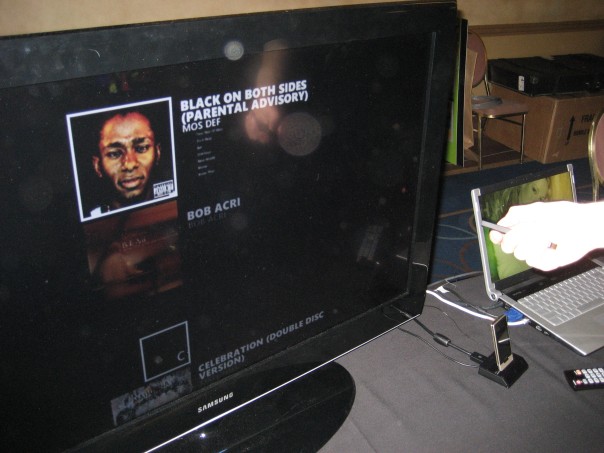 The Zune HD playing on an HDTV using the HD dock

Overall, I really like the Zune HD. It’s a great media device and if you’re not into the whole app thing and want a solid simple device that plays back your music, movies and pix in a great, cool way on the go, then look no further than the Zune HD as it’s got it all here. And if your big on music and like having “all you can eat” for only $15 a month, then well the Zune HD and Zune Pass are for you. I’m really excited for this “new” evolution in the Zune platform, and really can’t wait for the next gen of Zune devices to see what they got next. If you are though looking for a lot of apps and a more full featured web browser on your media player, then for now I’d still say that the iPod touch is the way to go.

While the lack of an app store, no speaker or Bluetooth, and the not as great web browser keep the Zune HD from overthrowing the reigning king of media players– the iPod touch– it does put up a fair fight as a great media player (which is what Microsoft is aiming for), and I’m happy to give the Zune HD a very good 4 out of 5 rating. 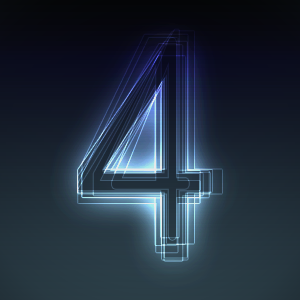 So what you think– Zune HD or iPod touch this year? Sound off in the comments.

The Zune HD is available now in 16 GB and 32 GB black and white version for $219 and $289 respectively, and both are out now.You can also customize the Zune HD in a bunch of colors and designs by checking out the Zune Originals  site here.