← Windows 7 Out Now!
Five Different Versions of Windows 7–Which Is Right for You →

What is the Motorola Droid?

If you’ve been watching any TV over the last few days (or any of the amazing Yanks-Angels series), you’ve probably been seeing the above commercial pretty often. This Motorola/Verizon commercial seems to be poking a lot of fun at what the iPhone lacks: a keyboard, a 5 megapixel camera, flash, multitasking, customization, widgets, and removable battery.

This all done in a very iPhone-like ad, the black text on white background and with chilled, fun music in the background. Though the end of the commercial says little of what their new device, the Droid, does or even looks like, other than that you should look forward to November. Well, if you don’t want to wait that long to learn about this exciting new phone, we have all the info and pix right here, and Verizon users– this one’s definitely for you.

Ok, first off, the name– Droid is short for Android, as in Google’s Android OS. This is the first Android device coming to Verizon, and boy is it awesome. The device is sleek looking with a huge 3.7 inch touchscreen and full slide out QWERTY keyboard (hence the keyboard comment in the ad), and is definitely one of the nicest looking slider phones we’ve ever seen– far better than the first Android slider phone, the T-Mobile G1.

The Motorola Droid– the phone behind the hype

Specs wise, your getting another really loaded device: 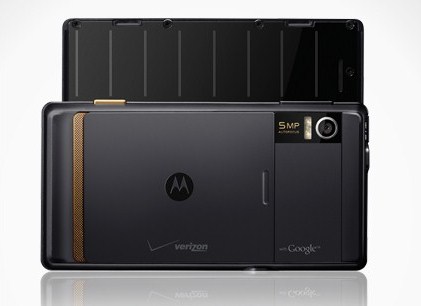 And then there’s one of the biggest features that is so big we’re can’t possibly put it on the bullet list: Android 2.0!

This is obviously a huge update to the Android platform, and looks to bring a bunch of new features to Android. We’re talking better contact integration with your Facebook and GMail (kinda like Motorola already does with their MOTOBLUR Android skin on the Cliq. Sadly, rumors are saying that Verizon and Motorola aren’t bringing MOTOBLUR to the Droid), a nicer looking interface, and my personal favorite– updated web browser with, coming next year, full Adobe Flash 10 support! While Android’s browser is already very good at displaying sites, using the same Webkit browser found on other phones like the iPhone and Palm Pre, this phone though will let you view websites that require Flash 10, like Hulu or ESPN vids (no known plans for the iPhone OS to be getting Flash anytime soon, though you can expect the Palm, Windows Mobile and BlackBerry phones to have Flash 10 on their mobile browsers next year as well). This though is still amazing.

You also get the usual Android apps: the Android market for downloading more apps, Google search with voice searching, GMail, Google Talk for IM, Google Maps with turn by turn directions and Street View, YouTube, and it even comes with other non-Google built in apps like the Amazon Mp3 store, QuickOffice for viewing Word, PowerPoint and Excel files, and Facebook.

We still don’t know an exact price or release date, but we obviously can expect it really soon (Motorola and Verizon wouldn’t hint toward November if they weren’t planning on announcing and releasing this right?). You gotta admit though, this looks like a sick phone– we told you Verizon’s got a lot of sick stuff on the way (and this and the Storm 2 aren’t the end of the new phones coming Verizon’s way, rumors are pointing to a lot more). If your looking for a new Verizon phone, you couldn’t have picked a better time to start looking.

We’ll of course keep you up to date on all the latest Droid news (you can sign up here at Verizon’s site for the latest emails as well), and all the latest Verizon phones. Though what do you think– does the Droid look to live up to all the hype it’s getting, or will it not come near the success the iPhone has had?

← Windows 7 Out Now!
Five Different Versions of Windows 7–Which Is Right for You →