New AT&T and T-Mobile Phones for the Holidays

So Verizon has announced their loaded holiday phone lineup a few days ago, but what about AT&T and T-Mobile? For sure they got some new phones ready to spend some holiday cheer with right? Of course they do, and we’re talking some really nice ones– like new BlackBerrys,  and even a new Samsung Behold 2 and LG Shine 2. What you waiting for, hit the link and get to it!

The Samsung Behold 2– with this cool looking cube

So the myTouch 3G just isn’t what your looking for in a new all touchscreen Android phone. You want something different, something more sleek and customized while still keeping Android. If so then this is gonna be the phone for you. Samsung and T-Mobile are bringing out the next version of the popular all touchscreen Samsung Behold, and boy is this some major upgrade. Not only are you now getting a clear, awesome 3.2 inch AMOLED screen that Samsung loves to use on new devices (see Sprint’s Android powered Moment, AT&T’s Impression, and Verizon’s Rouge), but also adding WiFi AND Android. Now this is what we call an upgrade to a device.

Samsung even customized Android further (like what HTC and Motorola have done with HTC Sense and MOTOBLUR respectivly), giving a nicer look to Android, while even throwing in things like TouchWiz for more widgets, and a very cool looking 6-way “cube” for accessing the multimedia features of the phone like YouTube, the internet, the Amazon Mp3 store, as well as your pix, music and videos.

Other specs on the phone include 3G, GPS, 5 megapixel camera with flash, auto focus and video (like the first Behold), Android 1.5 (sadly this isn’t the new Android 2.0 like on the Droid) with apps like Google Maps, Android Market, Google Talk etc., and up to 16 GB of memory through microSD card.

All in all, a pretty solid phone that if priced right (below $200– though price is currently unknown), could be a solid phone for T-Mobile users when it launches tomorrow on November 18th.

Ok, now let’s go to AT&T’s side of things, but before we do that, let’s take a look at the all the new 3G BlackBerry Bold 9700 that will be coming to BOTH T-Mobile and AT&T over the next few days.

The T-Mobile version of the Bold 9700

The new Bold is just sick, a pretty much perfect upgrade to the first AT&T-only Bold. You got a design similar to that of Verizon and Sprint’s Tour (it also is no where near the massive size of the first Bold), which has a great feel in the hand, while also giving you that new optical trackpad found on the Curve 2. Specs wise, you get everything you’d expect in the highest end BlackBerry:

If your on T-Mobile or AT&T and need/want a new BlackBerry, then we gotta say you’ll need to check this out.

Now let’s go to some new phones AT&T is bringing out over the coming days. 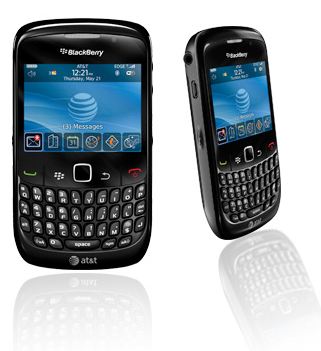 This BlackBerry is expected to come out sometime over the next “couple of weeks” for $99.99 on a new 2 year contract (though seeing as you can get the Bold 9700 with more power and 3G for just $100 more, we’d recommend going for that– remember, your signing a 2 year and in the long haul that 3G is more than worth it in my opinion).

The all new LG Shine 2

Finally! Seeing as the Shine has been out since 2007, we figure it’s about time AT&T got to updating this popular phone. The aptly named Shine 2, is that successor, though sadly, minus a few new design changes it is pretty much the same ‘ol Shine. Meaning you still got a 2 megapixel camera, 3G, that miror like 2.2 inch screen, GPS and a microSD card slot.

Pretty simple and should be a solid phone, but come on AT&T– why is this $119.99 in 2009 almost 2010! The old Shine, which again had pretty much the same specs and look, was pretty much free on contract! Let’s hope this price becomes much lower and reasonable (maybe between $30 and $50 with contract) very soon after it launches with the Bold 9700 (only $80 more!) on Sunday, November 22nd.

So there you have it. All the latest on new phones for AT&T and T-Mobile coming real soon. You looking for a new phone this holiday season? Any of these on your wishlist? Let us know in the comments.