← Sprint About to Release a 3G/4G Portable WiFi Hotspot? (UPDATE: It’s Official)
Google Officially Announces the Nexus One– All the Info You Need to Know → 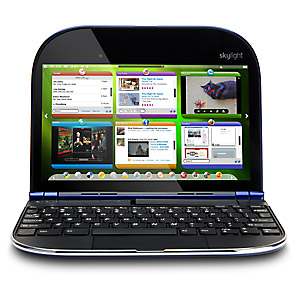 Just because CES starts on Wednesday doesn’t mean companies cant get a head start on announcing a bunch of new products. Lenovo has really taken full use of this, today officially unveiling a whole new line of computer called the Skylight smartbook. So what is the Skylight and what’s different about it than your normal netbook or laptop?

When you first look at the Skylight, you pretty much think netbook—10.1 inch screen, full keyboard, 1.3 megapixel camera, WiFi,  2 USB ports with an SD card slot (both a microSD card slot and a normal SD card slot), and even a mini HDMI port for hooking this up with your HDTV. The 10 hour battery also is right on par with that of the newer netbooks being released, and should be more than enough to get you through a day (or as Lenovo puts it, watching 2 movies back to back on a plane).

But here’s where it changes.

The Skylight has built-in AT&T 3G (again similar to 3G netbooks being sold at your local AT&T, Verizon or Sprint), but instead of running Windows 7 or XP and having an 160 GB or 250 GB hard drive and an Intel Atom processor, the Skylight runs on a Qualcomm Snapdragon 1 GHZ mobile processor (something we’re sure will be popping up in phones all over CES and 2010 in general. This will make all smartphones and other devices similar to them a LOT faster), and a Lenovo-customized Linux interface as the OS. This is a pretty simple web focused OS and is much quicker than Windows for starting up and getting you online. The OS features with special gadgets for quick access to Amazon Mp3, Facebook, Twitter, Gmail and YouTube all built in.

In terms of memory, the Snapdragon ships with an 8 GB minSD card, 8 GB flash built in, and also a 4 GB USB stick that is tucked in right above the keyboard (as you can see in the pic below, it’s the thing sticking up), with an additional 2 GB of online storage included.

And of course the size of this thing is also pretty important to mention—it ways only 2 lbs and is insanely thin (even thinner than some smartphones!), perfect for those who need a fully functional, always connected, computer but don’t have a lot of space in their bag to spare for carrying it around with them.

The Skylight is said to be coming April 18th for $499  (though there is talk that there will be a cheaper, AT&T-subsidized version available as well this spring) in either “Earth Red” or “Lotus Blue”.

← Sprint About to Release a 3G/4G Portable WiFi Hotspot? (UPDATE: It’s Official)
Google Officially Announces the Nexus One– All the Info You Need to Know →