← KIN vs. Smartphones—Which Would You Rather Buy?
Verizon Announces the Droid Incredible By HTC →

Back in January, we caught a short glimpse of the HP Slate, HP’s new tablet. Last week, Engadget uncovered some “unofficial” specs of the new tablet compared to the iPad. Later that day HP released a trailer of the Slate doing things that the iPad can’t do, including video chatting and taking pictures (that’s right, two cameras– one on the front for video chatting and one on the back for taking regular pictures), as well as:

Obviously, the Skype and camera features could make the HP Slate a thorn in the iPad’s side and we will see if these features will make the HP Slate more customer-friendly than the iPad (just as a note: HP hasn’t officially released a spec sheet of the Slate nor announced pricing, things– like pricing– is still very much rumor and subject to change). Check out one of the HP promo videos of the Slate, as well as the leaked iPad-Slate comparison sheet after the break. 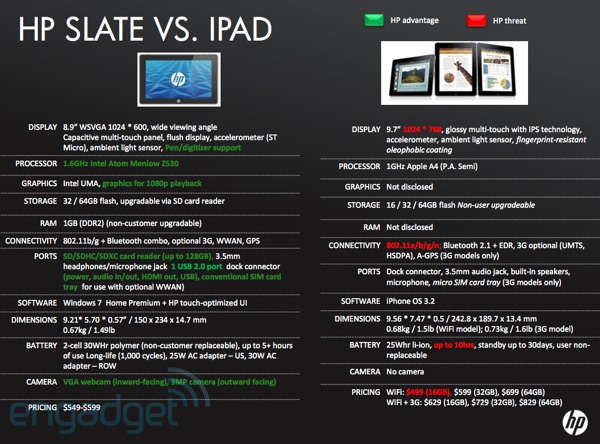 Slate vs iPad– click on pic to see bigger shot.

← KIN vs. Smartphones—Which Would You Rather Buy?
Verizon Announces the Droid Incredible By HTC →