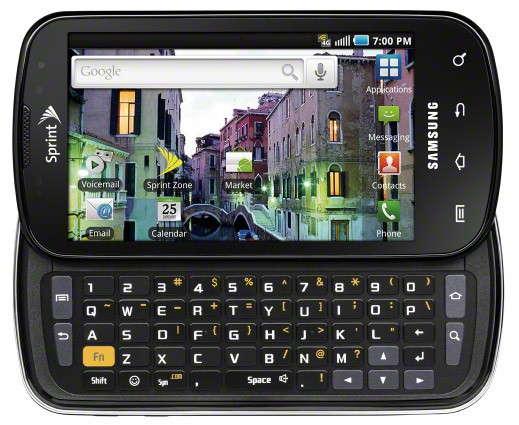 So you want Android, your on Sprint, and you want a 4G phone that is not only Android and 4G, but also has a slide out physical QWERTY keyboard instead of only a touchscreen one. Well, then you’re in luck– as Sprint and Samsung have just announced Sprint’s second 4G phone, the Epic 4G. So what is in the Epic 4G that, well, makes it want to offer the name Epic? Some really solid specs actually, including–

It also offers many of the other features the EVO offers (such as the ability to turn into a mobile hotspot, albeit here only offering 5 devices to connect at once, unlike the EVO’s eight). Yeah I know, pretty much the EVO 4G with a slightly smaller screen and camera but with a full slide out QWERTY keyboard. There is though something to be said for having that full QWERTY keyboard (particularly if, as is the case here, it doesn’t make the phone much thicker than the incredibly thin and sleek EVO), as even with the much improved touchscreen Android keyboards like Swype (which is also on the phone for when you want to type on the touchscreen), nothing quite beats a good ‘ol physical keyboard.

Oh, and if you are that person mentioned above, you may want to begin saving up money from that summer job; because while Sprint and Samsung have yet to announce a price or release date (let’s hope it’s soon!), I’m sure it will probably be in the EVO’s range of $200 with new 2 year contract and data plan (though it would be awesome here if I’m wrong).

So, anyone out there holding off on an EVO 4G to get this Epic 4G?