The Teens Guide to Back to School: Tips for Buying a New Computer– The Basics

Unfortunately, in life all good things like summer must come to an end and we have to return back to our regular ways of life and school– something that is now approaching rapidly as the calendar turns to August. With schools starting to begin over the next few weeks, we want to help make sure you go back fully prepared (gadgets wise at least). Over the course of the rest of the summer we plan to have a whole bunch of posts and guides on a whole bunch of ways to survive– and possibly even enjoy– the coming school year, and we’re gonna kick off this “series” with some tips on what you should look for when your out shopping for a new laptop for school and what are the basic specs that you should have.

When it comes to picking a new computer today, the choices are near endless. Walk into a Best Buy, Staples, Walmart etc. and you’re immediately surrounded by walls filled with computers and salespeople, well, looking to do what they can to make a sale.  If you don’t know what to look for you could very easily wind up with a computer that either is too slow, not the right size, over priced, or just not what you wanted or needed. And that’s what we look to fix here, the basic specs you should focus on when shopping for that new PC.

OS– Pretty much a no brainer when it comes to new PCs– Windows 7 is one of the best versions of Windows that Microsoft has ever produced, and whether you are upgrading an older Vista PC or getting this on a new one, you’ll find that Windows 7 is fast, easy and just works. There are however, many different versions of Windows 7, but when you’re out shopping for that new PC, you’re gonna wanna check out Windows 7 Home Premium. It’s the most common version of Windows 7 and provides more than enough features for pretty much any PC user. (For our full Windows 7 review, see here).

For Mac users, Apple only ships the latest OS X, Snow Leopard, with it’s new computers and it too is a great OS that will make you enjoy using your computer.

Processor: Unless you plan on doing a lot of intense graphic, movie, or audio creating/developing/producing or a lot of intense gaming, you should generally be fine with a processor like an Intel Core i3 or i5. A lot of people have been asking me recently on the differences are between the i3 and i5 and if it’s worth the price difference to go with an i5 (the i5 version is generally the more expensive of the two when comparing two similar computers), and I will most of the time tell them that it is. The truth is, computers are expensive and when it comes time to buying one, the intended goal is to have it work for many years to come. That being said, the i5 in my opinion is much better suited for the next few years with its Quad Core processing and Turbo Boost technology. In simple terms– it’s like you have the speed of 4 processors (compared to the Core 2 Duo and Core i3’s 2 processors), and with Turbo Boost, the computer will maximize performance and battery life by automatically speeding up and lowering the processors depending on what you’re doing (for example, turning off two of the processors while bumping up the speed of the other two when coping something into iTunes to make it go faster). And seeing as the laptop Core i5 has been on the market since early this year, the prices have come way down and well into that below $1,000 mark.

Now if you are on a tighter budget, look at a Core i3 or an AMD Athlon II, as both should also provide very good performance while still saving some extra $$$.

RAM— If the processor is the Peanut Butter, then the RAM is the Jelly in terms of speed on your computer and to make everything go well you’re gonna need a good amount of both. When it comes to RAM on today’s computers, I recommend at least 4 GB, and if you can and are buying for the long haul, go with 6 GB. You see, RAM really is the main key to ensuring your PC runs fast and smooth. Too little and even with the best of processors you still will be waiting an hour to switch from Facebook back to your notes. I’ve seen Windows 7 on netbooks with 512 MB of RAM (pretty much nothing by today’s laptop and netbook standards) and it’s run great, but have also been using it on PC’s with 4+ GB of RAM and there is a huge difference– particularly when it comes to speed and multitasking when running a whole bunch of apps at once. Today, a lot of programs (like Office and iTunes) are beginning to be written in what is known as 64-bit versions, versions that have access to all the RAM on your PC and therefore can run a whole lot better and faster (older, 32-bit software only had access to about 3 GB of it and even if you had 8 GB of RAM but was running Windows XP, Vista or 7 32-bit, your computer would only notice 3 GB and ignore the other 5). Most computers you will find today in stores like Best Buy actually will have 4 GB and Windows 7 64-bit standard and there is good reason for it– the future of computers is in 64-bit, and you may as well be ready for it today.

Note: unlike a processor, RAM is generally much easier to replace/upgrade after purchase, so you can always by 4 GB of RAM today and upgrade it later if you need more.

Screen size: Another huge factor when dealing with school computing is the limited space on most of our desks, a place where size is very much a factor. Here I would say to go with a laptop between the screen sizes of 13 and 14 inches. These computers are thinner, lighter and generally more portable (and also have better battery lives!) than a 15-17 inch laptop– offering a good blend of the portability you find with a netbook, but with the power of a 15-17 inch laptop. And if you’re traveling a lot between classes or find yourself with really small desks, you will definitely be glad you went with this. (Pic via Engadget)

Battery Life: Most classrooms generally aren’t equipped with enough power jacks to support a bunch of students with laptops and other electric devices, and who really wants to ever fight for one or lug around a surge protector to make sure you get a slot? Thankfully, PC makers know this, and most laptops now generally have battery in the 5-6 hour range, though again– if you can find one that offers more while still not terribly compromising portability, design or adding a lot to the price then go for it. 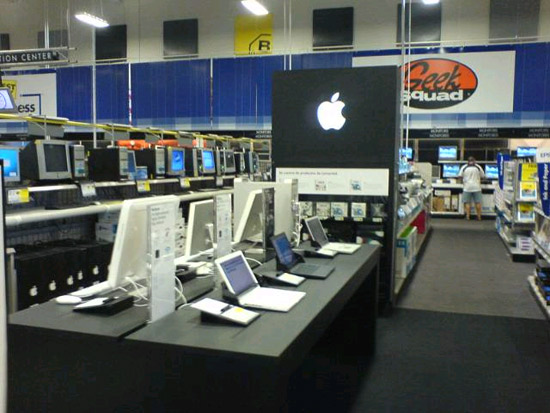 And now for our biggest point– Try it Out: Just like you don’t by a car online before you test drive it, you also shouldn’t buy a laptop without first checking it out to see if it suits you. Every laptop– be it from Acer, ASUS, Dell, HP, Lenovo, Apple, Toshiba, etc.– offers their own unique styles and design, be it in weight, color, or trackpad and keyboard. And like a car, this is an investment that your putting in a lot of money into and will be relying on greatly for the next few years. No matter what you read online or see on TV, those are just guides to help you but–  YOU  are going to be using it— so do yourself a favor and stop by a Walmart, Staples, Best Buy etc. and spend 5 minutes checking out different brands. As I told a friend of mine last week, you don’t even need to buy on the spot (though if you like what you see and are getting a good deal then by all means you should), but seeing as there are so many options, making the right choice requires elimination and the only way to make sure you’re eliminating and choosing wisely is by checking it out yourself.

So there you have it– our basic guide to choosing the right laptop for school. We’ll have more on this topic, including some picks of computers, as well as everything else you’ll need for the upcoming school year over the coming days and weeks.

In the meantime, what laptop are you planning to use for school this year? Let us know in the comments.

Have some tips you think can help you’re fellow students and readers for this upcoming year in school? We’d love to hear’em! Send them over to tips@teenstalktech.com  with the Subject line “Back To School” and we’ll see if we can include them in an upcoming post!