It’s been two weeks since Microsoft made their biggest video game move since the launch of the Xbox 360 5 years ago, launching the truly revolutionary Kinect add-on for the Xbox 360. For those who don’t remember, Kinect is Microsoft’s first attempt at motion gaming, using a bar with three cameras/sensors to track your movements with no need to hold anything in your hands (unlike the Nintendo Wii and PlayStation Move).

So, does Kinect live up to the hype? And more importantly, is this good enough to add to your holiday wish list? We’ve got all those answers and more in our teen review after the break.

As we did in our first look a few weeks back, we”ll break this review up into two parts– how Kinect performs for navigating the Xbox menus, playing back movies and video chatting, and how well it performs playing games. Let’s start with menus, watching video and video chatting.

Controlling the 360 by Kinect is probably the funnest and coolest way to control any game console (heck, any computer) EVER! Seriously– voice commands, hand motions– this is the future of how we will control our computers and it’s incredible. After you turn on the Kinect (which takes a little under a minute to start-up), you are launched to the normal 360 dashboard– the one designed for a normal controller. To get to the Kinect dashboard, just say “Xbox” then “Kinect” or wave your hand in front of the screen. After that, you’re taken to a special Kinect dashboard designed for navigating through voice and motions. Again, this is absolutely mind blowingly awesome– you can even set it up to have it use facial recognition to automatically load your profile. I really can’t properly state how cool this is.

And controlling video playback is also really smooth and responsive. While the Kinect version of Netflix or Facebook isn’t out yet (or we couldn’t access them), we were able to load up some trailers and music videos on the Zune app, and it too worked great. You can even in the Zune app say “suggest a movie” and have a random movie recommended to you. The ESPN app is also Kinect-friendly, and switching between the different screens like SportsCenter Right Now, the latest news, and highlights we’re just simple hand swipes away. Oh, and as we said in the first look, if you have a good enough internet connection these videos will play in HD!

And Video Kinect is remarkably good. I was able to video chat from my couch (!) to friends both on Kinect and on Microsoft’s Windows Live Messenger on a PC and Mac. Video was clear, sound came through perfectly, and again– it’s just insanely cool.

So yeah, if for no other reason then the awesomeness of controlling your TV, Kinect is worth a look. But as we all know, Kinect is a lot more than that…

Ah, the games. I’m not gonna lie, even after we first saw Kinect I was concerned with how much fun the games would be after the initial “wow” factor of the new motion controller wore off. Well, it’s been two weeks, and gaming on Kinect is still incredibly fun. We tested out a few games for Kinect– the bundled Kinect Adventures, Kinect Sports, Dance Central and Kinectamals– and all are not just impressive, but really, really fun too. 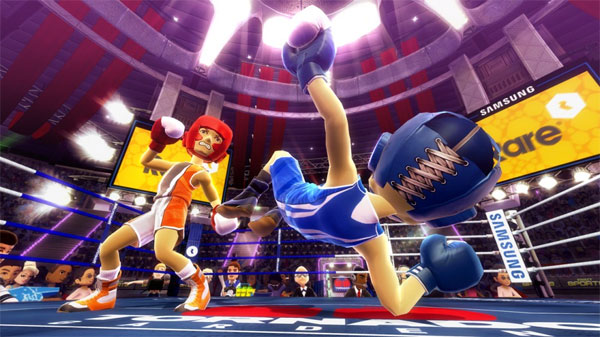 Now Kinect isn’t perfect– for example you need at least 6-8 feet for it to work (which the room my Xbox is in was just lucky enough to meet), so dorms might not be the best choice for this. There is still a lack of intense games like a Madden or Halo type of game, if you have an older 360, you’ll need an extra power slot (something you don’t need on the new Xbox 360 S released back in June), and some Kinect menus still require you to have a controller present– but these aren’t major issues for the most part (minus the space one, as without the right amount of room Kinect is almost useless). Assuming you’ve got the room and a 360, Kinect is something that should definitely be on your holiday wishlist, it’s mind blowingly advanced tech wise, insanely cool, and most importantly, incredibly fun.

And you better hurry if you want one before the holidays– Microsoft has already sold over a million in the two weeks it’s been out, so make sure to place those orders soon.