We told 4G phones would be huge here at CES 2011, and boy does that look to be true. Today at AT&T’s Developer Summit they announced their first “4G” phones (well explain why we put the “4G” here in a minute). The three phones are the Motorola Atrix 4G, Samsung Infuse 4G, and HTC Inspire 4G. All run Android. All have that “4G” speed. And all look to be absolutely amazing. Hit the break for all the info– and if you’re on AT&T, you’re gonna want to read on.

Before we get into the phones, let’s first break down the 4G AT&T is “introducing” today. You know T-Mobile’s 4G network? Well, unlike Sprint and Verizon who are using true 4G tech like WiMax and LTE respectively, T-Mobile (and AT&T) have both been upgrading their current 3G networks to an advanced 3G tech called HSPA+ while they plan their respective moves to LTE. AT&T plans to have their LTE, true 4G, network up by the middle of this year (think summer), unlike T-Mobile who plans to keep pushing their HSPA+ network to 4G like speeds (it already reaches up to an extremely impressive 14.4 Mbps today, with T-Mobile planning to bring it to 42 Mbps before the year is out. By the way, these numbers will vary based on how many are on the network at a time. Like your internet at your house our school, the more people on and doing heavy tasks like video chatting and downloading music and movies the greater chance the network will be much slower).

Today AT&T’s HSPA+ network is also at that 4G-like speed range, providing as you may have seen in some of their TV ads recently, one of the fastest 3G networks in the country. All this being said, you also may have seen the T-Mobile ads touting its 4G network on the myTouch 4G to AT&T’s 3G network and the iPhone 4– well, seeing as both networks are the same tech, AT&T has finally stood up today and declared their network 4G as well (something no doubt also affected by Verizon’s big 4G LTE plans for tomorrow). Again, AT&T’s true 4G LTE network (the one like Verizon’s which is even faster) will be out which makes this all even more confusing. Just know this– these 4G phones announced today are also really, really fast. Take a look.

This is the first of the new 4G phones, and wow—it puts phones like the EVO 4G and iPhone 4 to shame. Like completely owns them. Seriously– WOW! Look at these specs, if you didn’t know better you’d think this was a computer!

Heck it’s gotta fingerprint reader on it for heaven’s sake, yes a FINGERPRINT READER! And this by the way is just the start—you can DOCK this phone into a laptop dock and turn it into a full-fledged laptop with a special web-top OS running a full Firefox browser. Think of what Lenovo was trying to do at last year’s CES with their Skylight netbook, just here with a phone taking the place of a tablet. Imagine, putting this in your pocket and using it as your music player on the bus, plugging it in to the dock while at school to take notes (or text with a keyboard in a way that looks like notes), then turn it back into a phone by just removing it. This is by far the most amazing phone we’ve EVER seen.

The Atrix 4G will be available sometime in the first quarter of 2011 (basically sometime between now and March), for a price that has yet to be announced.

Sure if all AT&T did today was announce the Atrix 4G we’d be wowed, but nope, they didn’t stop– instead announcing two more phones, the HTC Inspire 4G and Samsung Infuse 4G. The Inspire 4G is a lot like the Sprint EVO 4G, with the same 4.3 inch screen, Android 2.2, 8 megapixel camera with dual flash and HD video recording, and 1 GHZ processor (like the EVO, not dual core like the Atrix).

But it’s also unique and different from the EVO, with it’s 12 GB of built-in memory, and some new things like HTC Hi-Fi for surround sound audio (like HTC’s Windows Phone  7 Surround— expect awesome sound out of this guy. It’s got Dolby and SRS surround sound just like on a home theater system), a very nice looking all aluminum casing, and HTC Sense 2.0 with features like tracking down your phone if it’s lost from HTCSense.com. The only thing that seems to be missing is a front camera, but otherwise it looks like yet again AT&T is holding nothing back.

The Inspire 4G, like the Atrix 4G, will be available sometime in the first quarter of the year for a price to be determined. 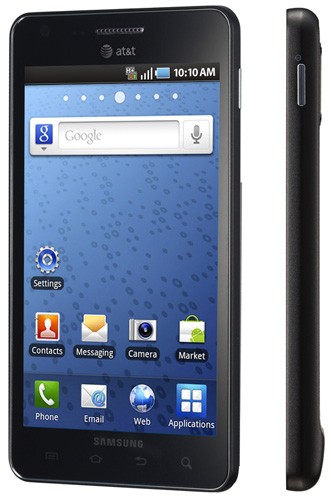 Thought AT&T would ease up a little on the 4G phone attack after the Inspire and Atrix? Not a chance. If for some reason the above two phones aren’t too your liking, check out this beast from Samsung. The Infuse 4G, like the Inspire and Atrix, is loaded with incredible specs including a ridiculously thin design (thinner than the iPhone 4! Just look!), 1.2 GHZ processor, Android 2.2, and 4.5 inch Super AMOLED Plus screen—yes, this is a bigger screen than the Inspire, Droid X and EVO, but not so much bigger as to not fit in your hand, AND an 8 megapixel camera on the back and 1.3 megapixel camera on the front.

The Infuse 4G will be available a little later than the Inspire and Atrix, in the second quarter of the year (meaning sometime between April and June) for a price still to be determined.

So that’s AT&T’s big announcements for the day—and if you’re on AT&T looking for a new phone I’d be super excited. Plain and simple, these phones are incredible, and are only a small fraction of the 20 (yes 20!) 4G devices AT&T plans to have out this year. Think about it, if these are the types of phones AT&T’s got planned for their HSPA+ 4G network, who knows what phones they’ll have when their true 4G LTE network launches this summer.

What do you think of AT&T’s “4G” phones? You gonna pick one of these up if your on AT&T and looking for a new phone? Let us know in the comments.