← Sprint Plans to Announce Something Big On Monday, and We’ll Be There Live!
PlayStation Phone is Official– Sony Announces Xperia Play →

If you haven’t noticed recently, there’s a little battle going on between the big 4 US wireless carriers– AT&T, Verizon, T-Mobile and Sprint– and that is the race to 4G. All four carriers have begun launching their own respective 4G networks and are deploying them across the US as we speak. Now obviously if you’re looking for a new phone today and are planning to buy it at its cheaper (also known as subsidized) price, the one you get with a 2 year contract, you’re gonna wanna get one that takes full advantage of these 4G networks.

For the past couple of weeks we’ve had a chance to take a look at the T-Mobile G2 by HTC, T-Mobile’s first 4G phone. So, what do we think? Read on for our full teen review!

On a hardware level the G2 is pretty incredible. Everyone we showed it too had the same feeling about it that we’ve had– it feels like a phone should feel (and this is a very good thing). The G2 fits perfectly in the “thin but not too thin” and “light but not too light” categories– in other words, for a phone with a full slide out keyboard it’s one of the thinnest we’ve seen, and in terms of weight it feels incredibly sturdy like your not holding a bunch of cheap plastic but instead a really expensive device. Everything from the metal back battery cover to the side latch to release it (really cool, and again shows that this is not some cheap phone) to the spacious slide out keyboard to the gorgeous 3.7 inch screen really show how nice this phone looks. And that screen. Everything– YouTube, websites, Facebook, pictures, texting– looked fantastic on it, and while it’s not iPhone 4 “Retina Display” resolution, it’s still in our opinion something you’ll be very happy with. 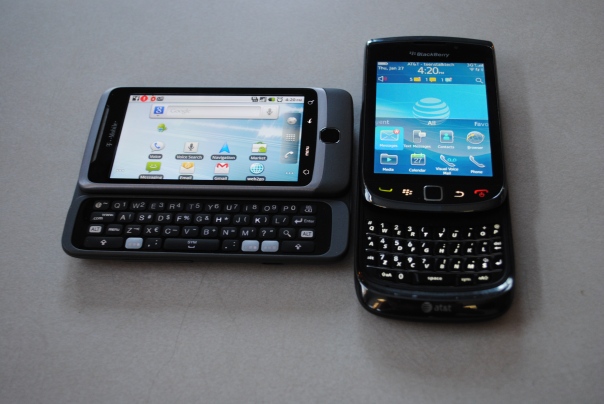 The slide out keyboard we also were pretty pleased with. The keys are big and nicely spaced, though we wish some of them had a more “clicky” feel to them. And while it’s no BlackBerry keyboard, it is pretty solid and like pretty much all keyboards on any new phone you get it’ll take some getting used to, but we were able to comfortably type on it after using it for about a day or so.

The G2 also has a Swype on-screen keyboard for those times where you don’t want to slide out the keyboard (like a quick text) and we found it to be right up there with the iPhone’s and much better than the BlackBerry Torch’s on-screen keyboard.

The 5 megapixel camera with flash took very nice pictures and should be perfect for taking pix with friends or taking photos on the go to upload to Facebook (though be careful when taking pictures in bright sunlight. For some reason here the camera app was nearly impossible to see even though the homescreen and other apps were completely fine. We still managed to take a picture using the camera button on the side and as you can see below, it came out pretty well). Video recording also came out really well, and this should be more than fine for taking some HD YouTube videos on the go. In short, the camera on here is definitely up there with those on the iPhone 4, Droid X, and EVO 4G, and is one of the top cell phone cameras we’ve seen. 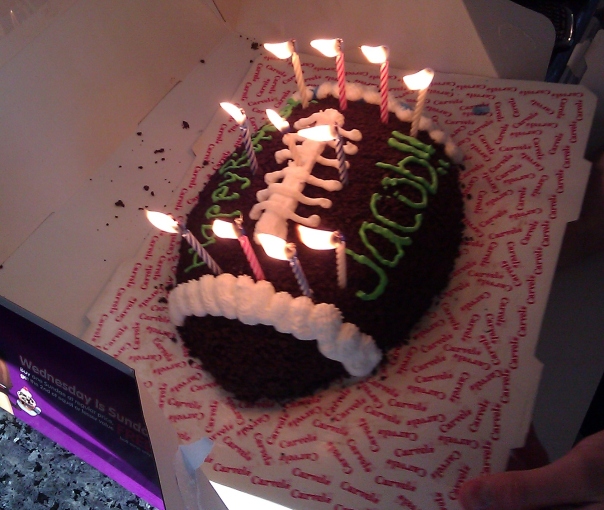 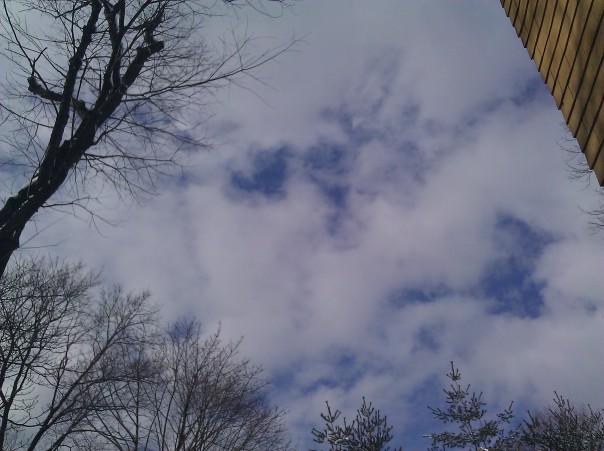 Sample shots from the G2– click on a pic for full size.

One bad part about the camera– there is no second front camera for video chat like on the myTouch 4G. Sure this is by no means a deal breaker (particularly if you don’t take a lot of self-portrait style shots or don’t plan to video chat from your phone), just it’s still a bit of a downer considering that pretty much all other 4G phones seem to have them.

We gotta admit, going in we thought the G2’s 800 Mhz processor would be a big buzz kill and really slow compared to the seemingly standard 1 GHZ+ processors seen on all other high-end phones today including T-Mobile’s other 4G phones, the HTC myTouch 4G and soon to be released Galaxy S 4G. We were dead wrong. The G2 flies. Apps open quickly, multitasking is smooth, and we rarely experienced any lag or delays in what we were doing whether that be sending a text, checking Facebook, taking a pic, listening to music or doing all at once. In terms of speed, you won’t be disappointed.

The G2 also runs the plain Android 2.2 OS, meaning this is pretty much straight Google and not heavily customized (or “skinned”) with software like other Android phones have been with things like HTC’s Sense, Samsung’s TouchWiz, or Motorola’s MOTOBLUR. And we really like this “plain” experience. Granted this is completely subjective, but we liked the simple look and feel of the homescreen and OS overall. Things also seemed to just run better and faster, like Google intended (though we did miss some of the customizations like HTC’s “pinch” to switch between homescreens that is found in their Sense UI). What we’d really want is the ability for the user to pick and choose on these phones whether to go with a custom skin or plain Android, but we digress…

Though regarding the G2 software we do wish for one other thing, the ability to remove some of the pre-loaded applications (sometimes called “crapware”). Thankfully there aren’t a lot of non-Google apps preloaded on the G2 (which is a really, really good thing) but there are certain ones (we’re looking at you Photobucket!) that just seem to constantly keep popping up and slowing things down no matter how many times we shut them down. Not a deal breaker, but still a bit annoying nonetheless.

Alright, so now let’s get to the big show here, T-Mobile’s 4G network. To all those complaining that this is just T-Mobile’s 3G with a new name of 4G, it doesn’t matter to us because whatever you want to call this, you have to agree on one thing– it’s incredibly fast.

YouTube HQ videos loaded up instantly and looked crystal clear. Web pages same thing. We constantly were seeing 4G speeds on average of about 4 Mbps down and 1 Mbps up, just about as fast as Sprint’s WiMax 4G and pretty close to what Verizon is saying their 4G LTE network will offer of between 5-12 Mbps (we even at times saw above 6 Mbps, something that would be 4G even according to Verizon). For those who don’t know or care to know what those terms of Mbps mean, just know this– T-Mobile’s 4G is fast. Really fast.

Of course the big problem with T-Mobile’s network is coverage, and while when we had 4G things were blazing, when we didn’t or when the signal dropped to 2G (remember, T-Mobile’s 3G is now viewed as 4G on a 4G phone like the G2) things got really slow. We constantly ran into random drops to 2G (T-Mobile’s “EDGE” network) even in places where we had 4 bars of 4G a second before; and again, compared to the 4G this 2G network seems to make everything seem really slow. Pages and videos took much longer to load and at times even text messages seemed to take longer to send. Were not sure why this happened and if this is just a problem with our test device or a problem on other G2s that can be fixed with a software update, but it seems to be a pretty big problem to us. We’ve reached out to T-Mobile and HTC on this and will update if we hear anything back.

And for those that really want a phone for more than just texting and viewing your Facebook and YouTube, like those who want to use your phone as a phone– you’ll be happy to know that the G2 does that too. Calls on the actual handset itself, not on speakerphone, sounded clear for both us and the people we were talking to (regardless of the network we were on). Speakerphone on the other hand sounded low and generally really bad even when we had it on the highest volume, something we found odd because music and videos both sounded really loud and clear.

You would think that running tons of apps constantly and having 4G on all the time would completely kill the battery in an hour, but the G2 seems to be pretty solid here as well. With emails, Facebook and Twitter updates set to push to the phone automatically, heavy texting and multitasking, and some light calling we were able to pretty much get through a day without needing to recharge. This won’t last you a full 24 hours straight, but it should be more than enough to get you well past the school day, again on 4G, without breaking a sweat.

So is the G2 for you? If you’re looking for a great Android 4G phone on T-Mobile with a full keyboard and don’t care about video chatting from your phone then this is definitely a solid choice. We’d even recommend it fully if we knew one thing– it’d be getting the upgrade to Android 2.3 Gingerbread and soon.

This is the problem with all Android phones, the lack of everyone being on one united OS like the iPhone has with iOS and Microsoft is doing with Windows Phone 7. At this point, with Gingerbread already being available for a couple of months on the Nexus S, the last thing you want is to buy a phone and found out it’s outdated and can’t run the latest apps. This problem becomes particularly glaring as you get further and further into your two-year contract. With the pace that the cell phone market is moving you can’t possibly stay on the cutting edge with new, more powerful phones seemingly coming out every other week, but to at least have the ability to run the same apps and have the latest updates makes that problem a whole lot easier to deal with.

All that being said, the G2 is a solid device and at $99.99 from T-Mobile on a new 2 year contract and data plan is a very good choice for a new 4G phone.

← Sprint Plans to Announce Something Big On Monday, and We’ll Be There Live!
PlayStation Phone is Official– Sony Announces Xperia Play →