So Verizon users– you’ve got an upgrade coming up sometime over the next couple of months and while you like some of the phones already out there, you really wanna know what Verizon’s got planned during the next few weeks or months so you don’t go out and buy something only to really regret it a week later. We’re here to help. While not all of these are confirmed to be coming to Verizon (some are just our best guesses based on rumors we’ve been hearing), here are 5 phones that are said to be on their way to Verizon that if you have an upgrade should be really excited for.

This is something you’ll be seeing a lot of from Verizon this year: very powerful 4G LTE phones. And the Droid Charge is definitely on this list. While it’s pretty pricey at $300 with 2 year contract and $30 a month unlimited data plan, it’s still pretty powerful as Verizon’s second 4G phone with specs like a 4.3 inch Super AMOLED Plus screen, 8 megapixel back camera and 1.3 megapixel front camera for higher quality video chat, Android 2.2 with Swype keyboard and Mobile Hotspot and 1 GHZ processor.

Whether this is worth going with over Verizon’s first and cheaper 4G phone, the HTC ThunderBolt, remains to be seen, but you should be able to try both out for yourself at your local Verizon store once it finally goes on sale (which should be any day now once Verizon fully fixes a recent problem that completely shut down its 4G network two days ago).

This is the 3rd of Verizon’s 4G phones announced back at CES in January, and like the ThunderBolt and Droid Charge, this is equally incredible. Rumors have this coming anytime between next month and June and like the ThunderBolt and Droid Charge, this will pack a 1 GHZ processor, 4.3 inch Super LCD screen (like Samsung’s Super AMOLED this screen will also make everything on it look great), Android 2.2 (though hopefully with the latest Android 2.3 Gingerbread by the time it comes out), 5 megapixel back camera with a second front one for video chat, and 16 GB of built-in memory (upgradeable through microSD to 32 GB).

We saw a non-final version of the Revolution briefly at CTIA last month, and while we couldn’t see how fast this is on 4G, the actual design of the phone felt great in our hands, the screen was sharp and apps were very quick to load. With the rumored price of this to be cheaper than the Droid Charge (a still pretty expensive $250 compared to the Droid Charge’s $300), this looks to give it and the HTC ThunderBolt a run for the best 4G Verizon phone so far. 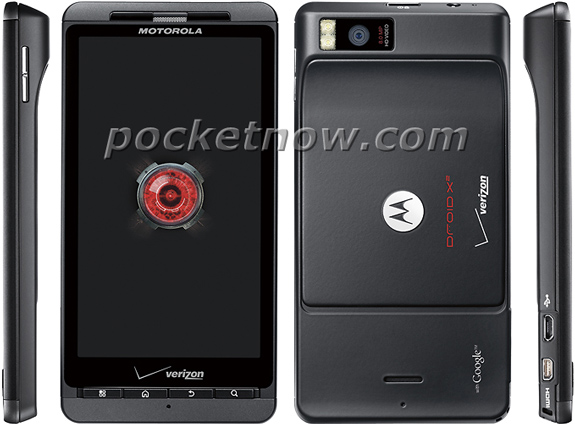 Verizon’s new Droid Incredible 2 isn’t the only new powerful 3G phone Verizon’s releasing this spring. Also expected to make an appearance between now and the summer is the next generation of another Droid, the Droid X^2 (meaning Droid X squared, like when you square something in math).

Unlike the Incredible 2 however, the big changes here look to take place under the hood. The same thin design and 8 megapixel camera with flash are all still here, as is the massive 4.3 inch screen which gets an upgrade to look much nicer, clearer and sharper. The biggest upgrade said to be coming here though is in speed, and this new Droid X^2 looks to be one of the fastest phones out there. Packing a 1.2 GHZ Dual Core processor and probably a RAM upgrade to 768 MB or 1 GB expect everything you do on here to be extremely fast no matter what it is (like watching HD video, playing games, texting, updating your Facebook or doing all at that and more at once!).

We still don’t yet know exact price (which if we had to guess would be under $200), release date and if this will be running the latest and greatest Android for phones, Android 2.3 Gingerbread, but hopefully all this will be announced soon.

Oh, and if you were wondering about the 4G Motorola Droid Bionic, that’s been delayed until the summer as Motorola has decided to change/upgrade the specs there to make it a much better phone. More on that as we get it.

How can we have an upcoming Verizon phone post without any mention of the PlayStation Phone? As was announced in February, Verizon is going to be getting the Xperia Play this Spring though as to when exactly that will happen we’re not exactly sure. After everything we saw of it in our first look back at CTIA, if you’re looking for a great gaming phone this will be perfect for you. It’s fast, sleek and games play great. Seeing as it’s almost May we should see this pretty soon hopefully at around $200.

Verizon is also expected to be adding one of the new much more touch-focused BlackBerry’s sometime over the next couple of months, with one of the first of those new BlackBerrys said to be the all touch BlackBerry Monaco/Touch/Storm 3 (clearly the name is still very much a rumor).

This new all touch BlackBerry, which we covered under that major BlackBerry leak in January, looks to be a top of the line BlackBerry and much better than Verizon’s first 2 Storms. And with specs like a clear, sharp, high-res 3.7 inch screen, fast 1.2 GHZ processor and the latest BlackBerry OS 6.1, this should make for a very solid BlackBerry.

More info on this hopefully will be revealed next week at BlackBerry World (which starts on Tuesday, May 3rd).

The latest rumor of what the iPhone 5 might look like, as you can see now with a much thinner design, larger screen and new home button (pic from This Is My Next)

So there you have it– some very awesome upcoming phones that should be coming to a Verizon in the next few weeks and months. Of course, as with AT&T, we’re sure Verizon has a whole lot more planned up its sleeve (I mean, that new 4G network is still be rolled out all across the US and they are also said to be getting the iPhone 5 the same time AT&T does whenever it comes out later this year) and we’ll of course keep you updated on whatever awesome new news they announce.

But we wanna know: any of these new phones for you or do you just plan to wait until the iPhone 5 or more powerful 4G phones like the re-designed, more powerful Droid Bionic come out whenever that is before you make a decision? Sound off in the comments.