Verizon’s first few months of 2011 have been very impressive– the iPhone, expansion of the 4G LTE network and the launch of  their first two 4G LTE phones– the HTC ThunderBolt and Samsung Droid Charge. For the past couple of weeks we had to a chance to test out Verizon’s first 4G phone, the ThunderBolt, with its killer 4.3 inch screen, 8 megapixel back camera with 1.3 megapixel front for video chat, fast 1 GHZ processor and of course, that blazing fast 4G LTE (spoiler: it’s ridiculously fast). To say this phone is loaded would be a dramatic understatement. But how do these impressive specs hold up in real life, and more importantly, if your on Verizon is it worth being your next phone?

For all that and more read on for our full teen review!

As far as design and the screen go the ThunderBolt is as you’d expect from HTC, a well put together device that looks great and feels great in your hand.

For any high-end phone today a sharp high-res screen is a must– and the ThunderBolt’s definitely got one. The 4.3 inch Super LCD screen on here is great and everything we saw on it– pix, videos, websites, YouTube– all looked bright and crystal clear. It’s not as sharp as the iPhone 4’s smaller 3.5 inch Retina Display, but its pretty darn close.

The ThunderBolt compared to the iPhone 4

Design wise the ThunderBolt is very much like Sprint’s first 4G phone, the HTC EVO 4G released last year. Obviously you’ve got that similar 4.3 inch screen (though we found the one on here to be sharper and clearer), but also the same fairly thin design with kickstand around back. While we found the ThunderBolt to be a tad thicker than the EVO (at least it looked like it was when we held a friends EVO side by side with the ThunderBolt– maybe it’s the black coloring of the EVO compared to the not as slimming grey of the ThunderBolt), we really liked how it felt in our had compared to the EVO. It felt like something well worth the $250 this costs.

So while it’s not the thinnest smartphone you’ll find on Verizon today, when it comes to design the ThunderBolt can definitely hold its own. 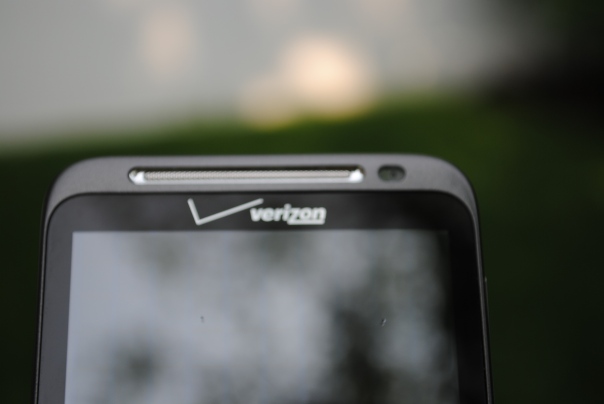 The ThunderBolt comes with two cameras, an 8 megapixel one on the back and a 1.3 megapixel one on the front. In our tests both cameras were very impressive with the 8 megapixel back camera taking high quality pictures and sharp 720p HD video with excellent audio (something that’s much appreciated and also often overlooked on cell phone cameras. You should be more than able to take some great videos with this). The 1.3 megapixel camera on the front was also very solid, and should be more than enough for video chatting and self portraits.

Here are a few sample pics that we took with the 8 megapixel camera: 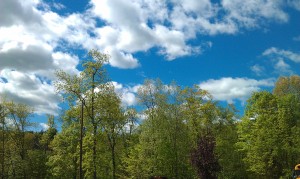 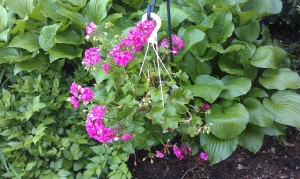 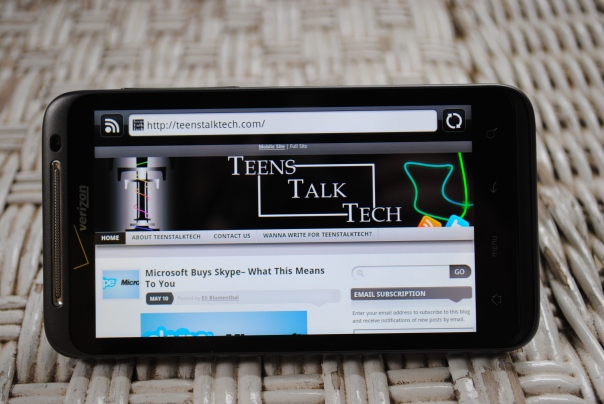 Like AT&T’s HTC Inspire 4G the ThunderBolt runs HTC Sense 2.0 atop Android 2.2. We found this, combined with that 1 GHZ processor and 768 MB of RAM , to make for a great experience. Apps loaded up quickly, games played fine, multi-tasking was smooth and we rarely ever faced any slow downs or lag. The HTC Sense was exactly like how it was on the Inspire (which is a very good thing) and for all the details on that see our Inspire 4G review here. 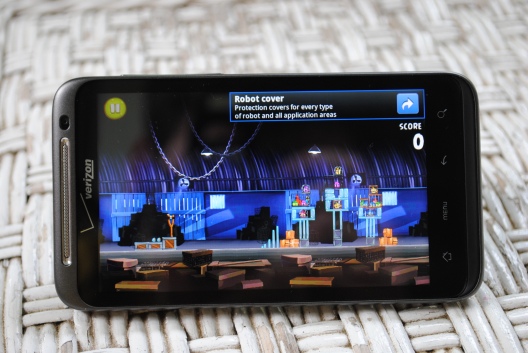 Now like the Inspire there are a few things we wish were changed here, the most important being the ability to remove some of the pre-loaded apps and game demos like TuneWiki, VZ Navigator, Let’s Golf 2 and RockBand. Unfortunately like other Android phones, these pre-loaded apps don’t look to be easily removable, but thankfully there’s not a ton of crapware on here (and some pre-installed apps like Slacker and Kindle we found to actually be useful). We still though wish carriers and phone makers would give the user full control of what apps they have on their phone, and that if they are gonna load it up with a bunch of demo apps that there at least be an easy way to remove them.

Oh, and it’s also worth mentioning that HTC has confirmed to us that the ThunderBolt will be getting an upgrade to the latest and greatest version of Android, version 2.3 “Gingerbread”, pretty soon (they said sometime “in Q2,” which means hopefully between now and the end of June. We unfortunately couldn’t get an exact date). Honestly, it’s about time we start seeing this update come to other phones beyond the Nexus S and we’re glad Verizon and HTC are bringing it here so soon after launch (yes we know it’s been 2-3 months since this phone came out but for Android phones that time is nothing when it comes to the usual waits for updates).

Like all Verizon phones, calls on the ThunderBolt sounded fantastic both on our end and those we called. Thankfully unlike the Inspire this was both when we were on the handset itself and when we went on speaker (which also played back music and videos pretty well). We do though wish the sound for YouTube, music and videos on the speaker was a little louder, but all in all, the audio on here was very solid.

Calling Verizon’s 4G LTE network fast is in no way doing it justice. It’s mind-blowing. You think your home internet is fast? Think 3x that. You think your 3G is fast? Try 10x that. Yes that’s right, in New York City we’ve been getting speeds of up to 30 Mbps, or fast enough to download a full HD movie in minutes! Verizon claims they’re 4G network will deliver speeds between 5-12 Mbps (or about 5x faster than your current 3G and on par with most home internet connections) and we’ve not only been rarely dropping below 10 Mbps, but are constantly seeing on average 10-20 Mbps (again, much faster than all the other carriers’ 4G networks and on par with what you see on your home internet– just this you can take with you wherever you go). 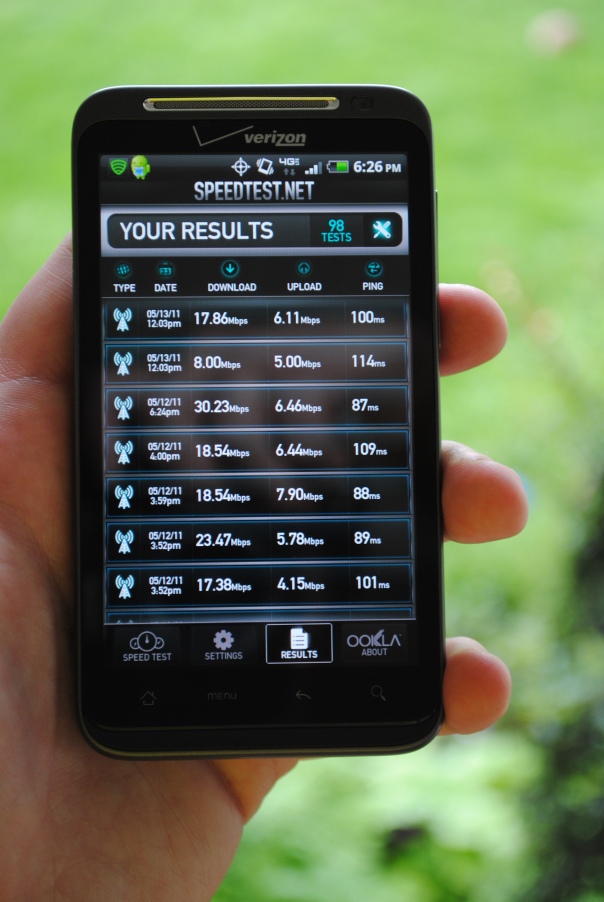 To put this all in simpler not as “techie” terms, YouTube and online videos started in HD pretty much instantly with no buffering, video chats were extremely clear, and sites and apps also downloaded pretty much instantly. Again, to say this is fast is a major understatement.

Sadly, this 4G comes at one major price– battery life. 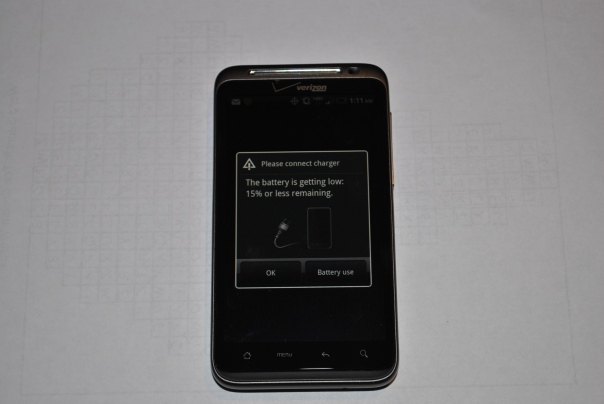 As great as the screen, camera, software and 4G are on the ThunderBolt the battery life is as bad. Now the ThunderBolt is a very powerful phone, one that requires a lot of power particularly with that 4G chip inside that itself needs a lot of power to run. Sadly, in our tests it couldn’t run long enough. We unplugged the phone at 7 AM and by 2 PM it was on its last legs— that’s about 7-8 hours of battery under normal use of just texting, emails and some browsing and music playing. Don’t expect to get a full day here unless you constantly carry your charger with you or you buy HTC’s extended battery pack– which doubles the size of the battery– for $60 (though this battery pack also adds some extra weight and thickness to the already not too thin ThunderBolt).

To make matters worse there isn’t a little 4G widget to turn 4G LTE on or off like you can do with 4G on the EVO 4G to save battery. You can download an app for this (called 4G LTE OnOff), and when we used it to turn 4G off we got more than enough battery to make it through the day. But this is not as simple as it should be and we really wish HTC and Verizon will include a widget for turning off 4G in the upcoming Gingerbread update.

So if your on Verizon should you go with the ThunderBolt as your next phone? After testing it out for the past couple of weeks and seeing all that it has to offer we’d say the ThunderBolt is definitely one of Verizon’s finest, and fastest, phones to date. But right now for $250 with 2 year contract, and the probable investment in the extended battery for $60, you may just wanna check out the new Samsung Droid Charge, which from what we’ve heard offers much better battery life in a thinner design and would end up being around the same $300 on contract price.

Of course if you can find the ThunderBolt online at a place like Amazon for $199 or lower its definitely worth a strong look. Even if you go with this and the extended battery you’re still looking at a savings of at least $40 for a very good phone that looks to be just as powerful and impressive as that Droid Charge (and who knows, hopefully Verizon and HTC include that 4G on/off widget in that Gingerbread update to make battery life a lot more manageable without you having to buy that extended battery).

The HTC ThunderBolt is available now for $250 with 2 year contract and data plan from Verizon.