If you’ve watched any of the NBA playoffs (or any TV in general) recently, you’ve probably seen an ad or six for one of T-Mobile’s hottest new phones, the Sidekick 4G. The Sidekick 4G is the latest and greatest in the Sidekick line, and the first to pack new features like Android, a 3.5 inch touchscreen, 4G and a 1 GHZ processor– all while still keeping that flip-out full QWERTY keyboard Sidekick users know and love.

While this all sounds great, you probably wondering how does this latest Sidekick 4G hold up in real life? Well, we’ve taken it for a spin the past few weeks and we’ve got everything you need to know after the break in our full teen review.

Put simply, if you do a ton of heavy texting/tweeting/Facebook updating you’re gonna love the Sidekick 4G. The high-res 3.5 inch touchscreen— while smaller than T-Mobile’s other 4G phones like the HTC Sensation 4G, LG G2X or Galaxy S 4G– is incredibly sharp with pics, games, videos, texts, and websites all looking very crisp and clear. And that slide-out keyboard is just amazing. Next to a BlackBerry keyboard, this is one of the best we’ve used with the keys very well spaced and very easy to type with and the slider giving off a very sturdy feeling. Texting on here was just great.

Now design wise the Sidekick 4G is well, not you traditional Android phone. Most Android phones have four buttons underneath their screen– one for menu, search, home, and back. The Sidekick 4G is a bit different,  instead placing one button on each of the four corners of the screen so you have one for menu, home, back and Jump Key (in place of search)– which gives you one click access to a list of your most recent apps. This isn’t the most comfortable way to place the keys (particularly when you’re trying to use the phone with one hand), and it takes some getting used to, but as with everything else, once you get used to it you’re good to go.

The phone felt pretty good in our hands (it’s about the size of an iPhone 4), a little too plastic-y feeling, but overall nice and sturdy.

All in all, the Sidekick 4G’s design isn’t perfect but it’s still very good.

The Sidekick 4G packs two cameras, a 3 megapixel one on the back and a VGA one on the front for video chats and self portraits. In our tests both cameras were good, not good enough to replace your regular camera, but more than enough for a quick pic with friends or for video chats. One major downside of the back camera is its lack of a flash, so make sure you take your pictures in good light.

Here are a few sample pics from the back camera (click to enlarge): 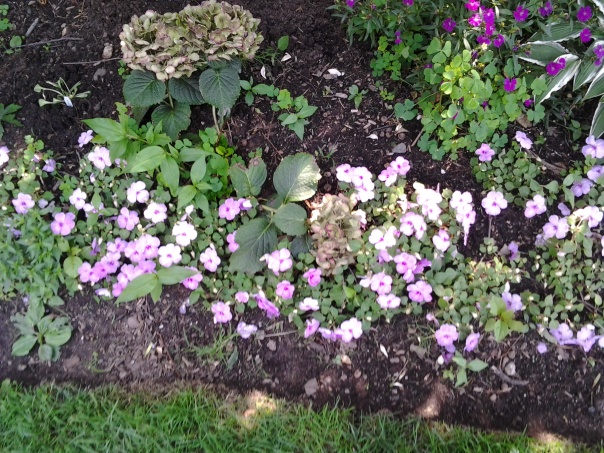 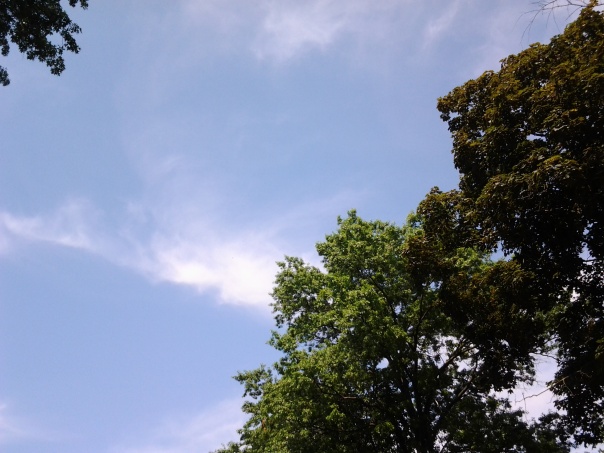 Calls on both the phone itself and speaker sounded loud and clear on our end and those we called. The same was true for music and video playback, with everything sounding just the way we like it: loud and clear.

Battery life on the Sidekick 4G was solid. We were able to get through a typical day (8 AM to 6 PM with a lot of texting, video watching and browsing) but the phone died shortly thereafter. We also noticed the battery dies fairly quickly when it’s in standby mode, barely getting through two days when not in use pretty much at all. Overall, it’s good, but you’re going to need to re-charge it every night (which you probably would do anyways). 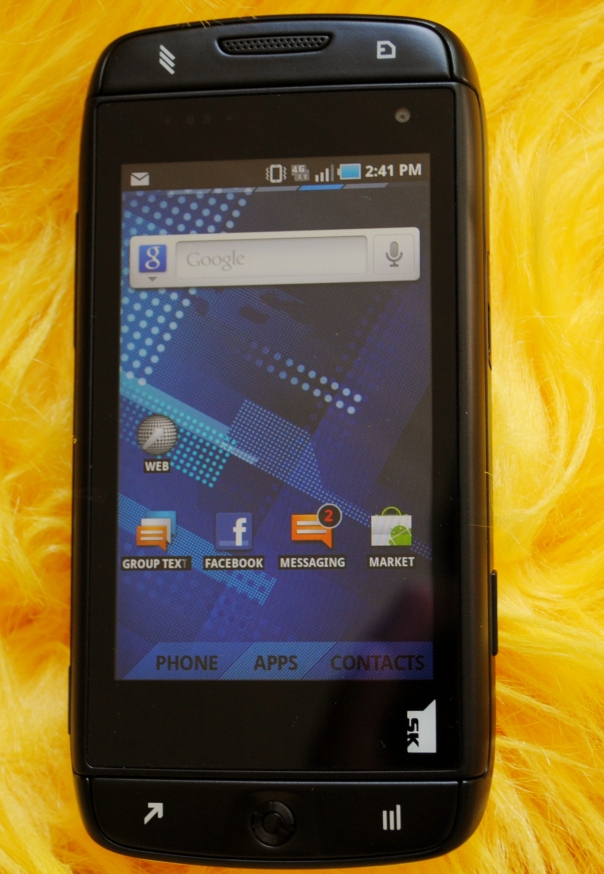 The Sidekick 4G is the first Sidekick to run Android, running version 2.2 with a special Sasmung interface on top that’s different from the TouchWiz found on phone like the Galaxy S 4G and Infuse 4G. We really liked using this interface and if you’re a heavy texter or Facebook user then your really gonna love this.

Not only do you have all the features of Android 2.2, but the tweaks Samsung and T-Mobile made to the interface and apps make it much easier to connect with friends. The homescreen for example offers you two ways to unlock the phone– swiping down to go to your last screen (like any unlock screen) or swiping up to go to a particular app you like for quick and easy access (this could be any app. We set it to messaging but you could set it to Facebook, email, the browser or even Angry Birds). New texts also pop up on the top of the screen with the ability to reply right on the spot without having to open up the messaging app. We really liked this.

Pre-loaded on the phone are the standard Android apps (Gmail, Android Market, Maps, YouTube etc.), a few T-Mobile apps (like T-Mobile TV, Qik video chat, Amazon Mp3 and TeleNav GPS– which you can’t remove though it thankfully doesn’t run unless you open it) but also apps like DriveSmart, Cloud Text and Group Text. We really loved these last three and hope T-Mobile and Samsung will bring them to future devices as well.

Group Text on the Sidekick 4G

Group Text is designed to make your text messages with multiple friends into a chat room so everyone can talk to each other simultaneously (think of it like an IM or BBM groups just without the need for everyone to have a data plan, only texting). Making a group takes literally two seconds (you just go to the app and add the contacts you want) and it works with any phone that can text— other Sidekicks, iPhones, BlackBerrys, non-smartphones from three years ago. If it can text it will work. Now this may be annoying for your friends the first time you use it (it’s a whole different, unexpected idea of texting with multiple people being in the same chat and getting any message sent to the group instead of just one) but trust me, it makes figuring out what you’re doing that night a whole lot easier. 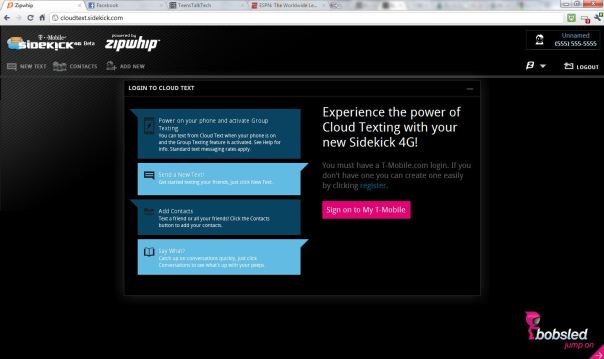 Controlling your texts from your computer with Cloud Text

Cloud Text allows you to take your text messages online and continue your conversations from any computer through a special website (http://cloudtext.sidekick.com). All you have to do to log in is create a My T-Mobile account by entering your phone number and signing in using the temporary password it sends you through a text. After that all your new texts come in right to your computer (in addition to also coming on your phone)  along with all your previous texts with that person in the same chat window. This is great for when your phone dies (or if you want to text but can’t take out your phone and all you have is your computer, like in class) though we unfortunately couldn’t get Group Text to work with this.

DriveSmart works as you’d expect an app like this to work. Turn it on once you enter the car and all calls are sent to voicemail and all texts are automatically returned with a preset message. Once your done driving turn off the app and your phone is back to normal. It’s a nice easy app that helps keep you focused while driving and we are glad that T-Mobile and Samsung pre-loaded this on all Sidekick 4Gs.

In terms of how the Android part of the phone performs, while it’s not as fast or powerful as the dual-core LG G2X or HTC Sensation 4G, it’s still pretty solid with its 1 GHZ Hummingbird processor. Apps loaded quickly and games played fine, though we did occasionally notice some slow downs (but simply going to the Task Manager app and ending the apps you’re not using fixes this). We also like how we were able to use the Swype onscreen keyboard when the phone was closed (great for those times where you just don’t want to pop out the physical keyboard).

Samsung wouldn’t give us any information about whether this will be upgraded to Android 2.3 (we hope it will), but all in all, the software side of this is just as solid as the hardware— and that’s a really good thing. 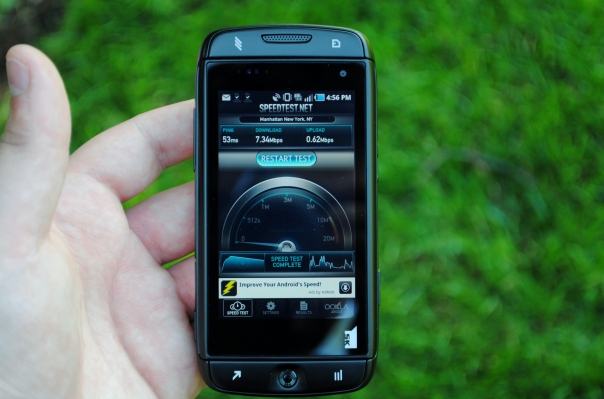 Obviously one of the biggest parts of a 4G phone is how well it handles the 4G. We’re happy to say that the Sidekick 4G lives up to its 4G name. We saw speeds around the NYC area generally between 6-10 Mbps download and 1-1.6 Mbps upload– or speeds equal to what most of us get on our home internet connections. Websites, app downloads, music streaming, YouTube all loaded pretty much instantly with little to no buffering for the music and YouTube streams.  This is everything we’d expect from 4G today.

In a T-Mobile line up that now includes impressive phones like the HTC Sensation 4G and LG G2X how does the Sidekick 4G hold up? In our opinion very, very well.  Sure it’s not as packed hardware wise as the dual-core G2X and Sensation 4G, but its great keyboard, software and even better price— $49 with 2 year contract and data plan (which starts at $10 a month for 200 MB– great if you internet but don’t plan on watching a ton of YouTube or streaming a lot of music over 4G) from places like Amazon — make it in our opinion a great phone for anyone who does a ton of texting and loves a real physical keyboard. If you’re looking for a new T-Mobile phone anytime soon you should definitely check this out.

The Sidekick 4G is available now, in black or white, from T-Mobile for $129.99 on 2 year contract and data plan.