There have been a lot of great phones already this year but the release of the Xperia Play, aka PlayStation Phone, was probably one of the most anticipated. Finally, the mix of a PSP and a phone was here. We finally got to spend some real quality time with Sony Ericsson and Verizon’s long awaited Android/PSP mashup, and well, was it worth the wait?

We’ve got all the info you’re gonna want to know and more, so read on for our full Teen Review of the Xperia Play. 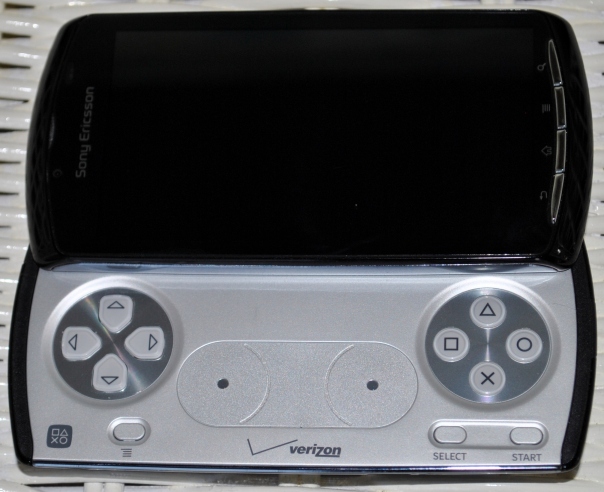 Obviously the big thing with the Xperia Play is its design. The top part of this sliding phone is your traditional sharp, high-res 4 inch screen which displays pix, videos, text, games exactly as you’d expect: nice and clearly. The bottom half of course is not like your normal slider phone, with that long-awaited PlayStation gamepad sliding out in place of the usual keyboard. We really liked the overall feel of the gamepad and found the buttons to be everything you’d want in a controller– firm but still easy to press. One thing we didn’t like in gamepad itself was the optical joysticks (those circles in the middle) which we found in our games to be very hard to use and we often found ourselves going back to the d-pad instead. We’ll get more into the gaming in a moment.

And while the Xperia Play is a bit too plastic-y for our personal tastes, overall it did feel great in our hands both when closed and open. It felt like something well worth the $200 you spent on it and that’s a major plus.

All in all, we were very pleased with design of the Xperia Play.

The Xperia Play has two cameras, a 5 megapixel one on the back and a second front camera for video chat.

In our tests the back camera took impressive, clear shots that should be more than enough to become your regular everyday camera for taking Facebook photos. The front camera on the other hand was a different story. Indoors we found the front camera to constantly switch between color and black and white, and when outside we had color but it was still a pretty blurry. Video chatting on this was ok, but it isn’t wasn’t anywhere near as good as on other phones like the ThunderBolt and iPhone.

Here are a few sample pics from the back camera (click to enlarge): 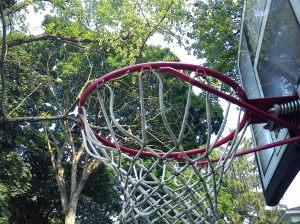 The Xperia Play is a Verizon phone and like all Verizon phones, calls came in on here perfectly. On our end and on those we called there were no problems hearing or being heard even in places we were getting only one or two bars of Verizon service.

Music, games and videos also sounded nice, loud and clear when we played them on speaker and that’s just the way we like to have it. (Just a word of note for those using those newer iPhone/iPod headphones– you may want to get a different pair as in our testing we found you need to hold down the volume/play/pause button to have the audio come in clearly. This seemed to just be with the iPhone headphones and wasn’t a problem when we used other brands of headphones).

Before we get into how games played on this bad boy let’s cover the software side of things. The Xperia Play is much more than just a gaming phone, it’s also a normal Android phone running the latest and greatest Android 2.3 Gingerbread with no special custom skins like what HTC and Samsung put on their Android phones with HTC Sense and Samsung TouchWiz.

We really enjoyed using this and found everything to run quickly and smoothly with hardly any lag or freezes even when under heavy multitasking (thanks for this also go to that fast 1 GHZ processor). We also liked how Verizon and Sony Ericsson really limited the amount of pre-loaded software on here to a few games (which again, we’ll get to soon) and the usual Verizon apps of V Cast Navigator, Apps, Visual Voicemail, and Backup Assistant as well as Skype and Amazon Kindle. You can’t remove any of the Verizon pre-loaded apps, but thankfully they don’t run unless you open them and are pretty easy to ignore. 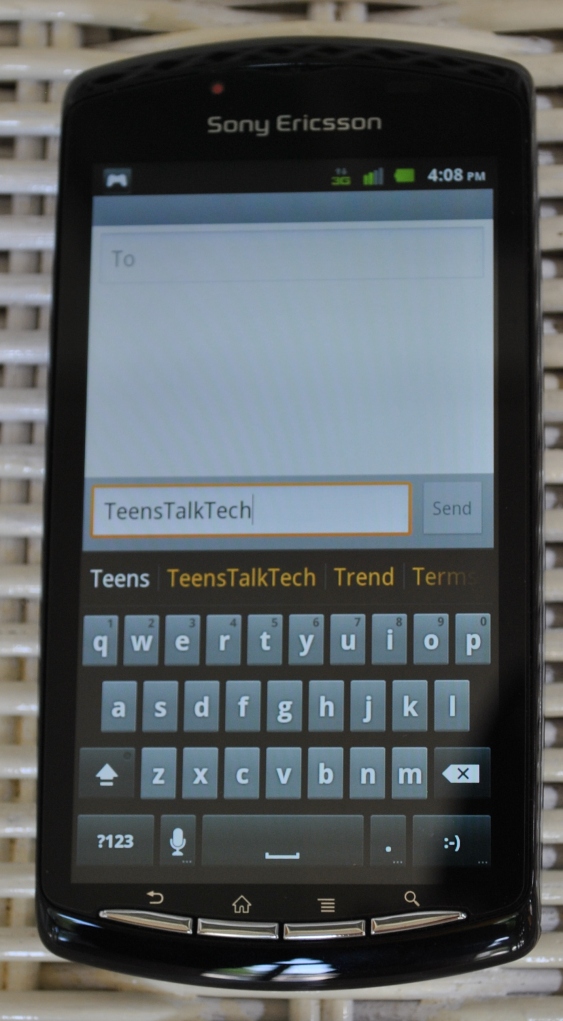 One thing we do wish Sony Ericsson and Verizon put on here was a larger keyboard. The regular Gingerbread keyboard is nice and all, but we found it on the Xperia Play to be a little to small for our fingers and very easy to make mistakes typing with. This isn’t a huge deal as again, this is an Android phone and you could always install Swype or some other keyboards later on. 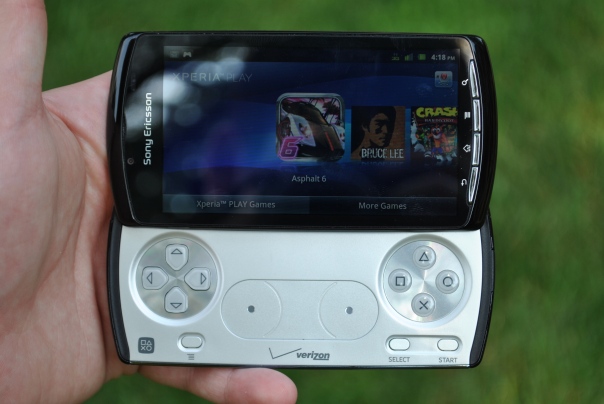 The Games menu on the Xperia Play

So here’s the big question with the Xperia Play– how well does it game. In our use, it does this very, very well. Graphics were sharp and clear— much better than a DS and definitely on the same level as a PSP/3DS/iPod Touch– and together with that gamepad makes playing games on here a gamers dream.

Star Battalion on the Xperia Play– yes, the graphics are that good!

The Xperia Play comes with 6 pre-loaded PlayStation games (Asphalt 6, Madden 11, Gun Bros, Crash Bandicot, Bruce Lee, Star Battalion and The Sims 3) and one non-PlayStation game, Tetris (for when you want something a little more casual and don’t want to slide out the gamepad). All games played well, though some do take more getting used to than others. Madden for example requires you to choose plays using the touchscreen instead of just continuing to use the gamepad’s controls like on a PS3 or Xbox 360. We found this type of inconsistency in other games as well though again, it just takes some getting used to and isn’t a deal breaker.

More PlayStation games, like Pac-Man, UNO, Let’s Golf 2, Assassin’s Creed and Tom Clancy’s Splinter Cell Conviction are available in the V Cast app store for prices between $1 and $7 and you of course have full access to the Android Market and can download any game (like Angry Birds) from there.

In short, the Xperia Play lives up to its gaming hype and is a great gaming phone. 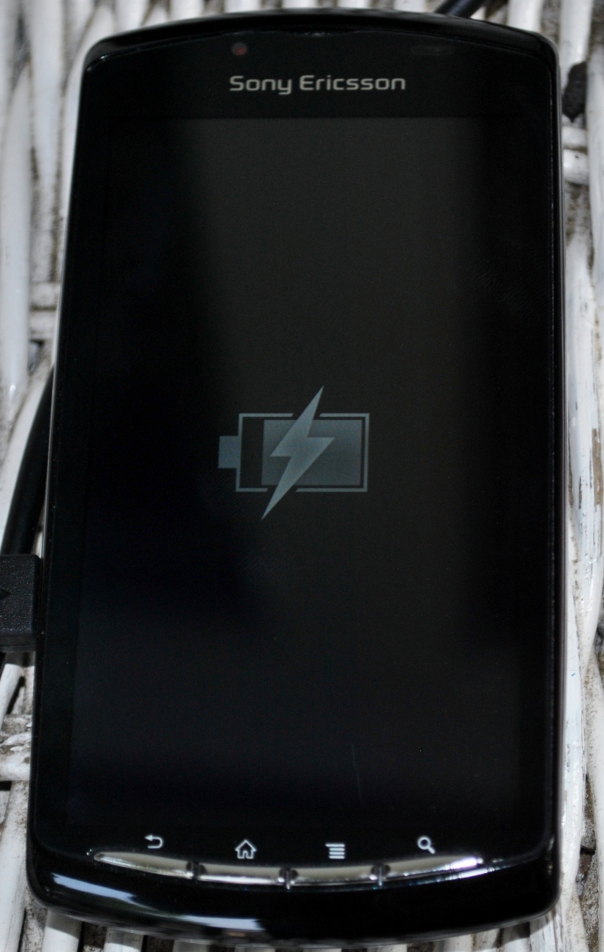 The battery life on the Xperia Play is also very good. We were able to get pretty much a full day’s use on the Xperia Play, from about 8:30 AM to 6 PM with constant music streaming, texting, IMing, browsing and even a few minutes of phone calls and gaming. In more normal use where you’re not constantly on 3G streaming music while doing all that other stuff you can expect this to last you well through the day. 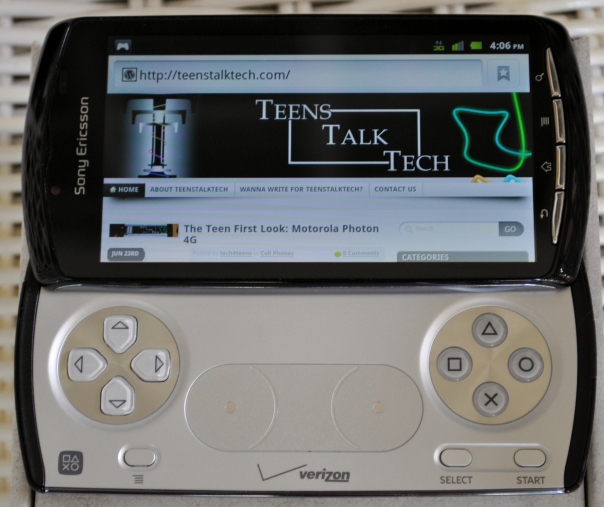 Now here’s the big final question– is this better than the other $200 3G Verizon phones like the iPhone 4, Droid X2 and Droid Incredible 2? We liked the Xperia Play but unless you really want a slide-out PlayStation gamepad we’d have to say no. Sure the battery life and software on here were very good and the games played great, but you have to be honest with yourself: just how often do you really think you’ll be playing games on your phone?

If the answer is you plan to play a ton then this is without question the perfect phone for you. But everyone we showed the phone to had the same opinions we had– sure this is a very cool phone but it’s not worth giving up the more power, better cameras and thinner designs of the iPhone and other above phones (and many were more than fine just playing games from the App Store or Android Market).

The Xperia Play is available now for $200 with new 2 year contract and data plan from Verizon.