OS X Lion Breakdown: Everything You Need To Know About Apple’s Next Big OS

With Apple’s next big version of OS X, called Lion, seemingly set to launch any day now a lot of you want to know “what exactly is so great about Lion and what does it mean to me?” Well, we’re gonna recap everything you need to know about Lion for you right here so you’re ready for whenever it actually comes out.

What’s the price and when and where can I get it?

Lion will be available sometime this month for $29.99 (the latest rumors are it will come this week, but they’ve been like that all month so who knows). Now the exact date isn’t yet officially confirmed yet by Apple, but we wouldn’t be surprised to see it launch this week with those also rumored new MacBook Airs. If you bought a new Mac on or after June 6th you’ll be able to save the $29.99 and get Lion for free.

Lion is also the first version of OS X to be available only as a download in the Mac App Store. This means for that you need to have the today’s version of OS X, called Snow Leopard, installed if you already have a Mac and want to upgrade.

What are the specs my Mac needs to have for it to run Lion?

To run Lion your Mac needs to have at least: an Intel Core 2 Duo processor (basically in any Mac bought since late 2006. The latest Intel Core i5 and i7 processors found on the most recent Macs will run Lion as well), 2 GB of RAM (which became the standard option in 2007 on MacBook Pros and 2009 on plastic MacBooks), 8 GB of space on your hard drive and as we said above, currently be running Snow Leopard (aka version 10.6). You can check all of this by clicking on the Apple logo in the upper left and then “About this Mac.” 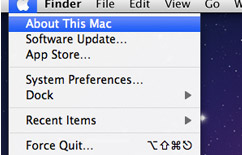 To make things a bit simpler, OS X Lion should run fine on any Mac bought within the last 2-3 years and its only on those older Macs from 4-5 years ago that Lion might not work for you. If you find yourself short on RAM you may want to look into buying an extra GB or two and installing it but be warned– this isn’t the easiest on Macs and on some (like the more recent unibody MacBooks) may not even be possible unless your willing to open up the computer and void your warranty. So be careful.

Ok, so now that all that’s done let’s get to the good stuff– what’s new and why you should want this. On top of getting all the latest security fixes and being able to run all the newest and latest apps in the Mac App Store, here is a recap of some of the biggest new features coming in Lion.

Resuming back to what you were doing in OS X Lion

And these are just a small part of the over 250 new features in Lion (others include Facetime for video chatting with iPhones, iPads and iPod Touches from your Mac), but they’re the ones we think a lot of you will find the most useful and interesting.

We’ll of course keep you updated once we hear news about an official launch date but hopefully this helps with understanding what’s the big deal with this major new OS. So, are you gonna spend the $30 to upgrade and if so, what new feature are you most looking forward to? Let us know in the comments.