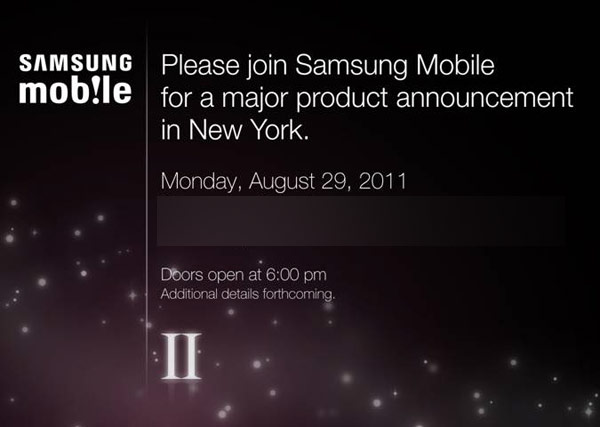 We know a lot of you have waited for this day to come, and you can now rest assured– it’s now finally almost here. We just got an invite from Samsung to an event in New York at the end of the month for a “major product announcement,” with the Galaxy S II’s little “II” logo of course hanging out in the bottom left. And that means just one thing– Samsung’s next generation of the hit Galaxy S line (aka the T-Mobile Vibrant and Galaxy S 4G, Verizon Fascinate, Sprint Epic 4G and AT&T Captivate) is now only a couple of weeks away from making its official arrival into the US. If you’re looking for a super-powerful, insanely thin phone with a large and incredible screen you’re gonna want to wait for this.

For those who don’t know, the Galaxy S II is one of the top Android phones available today, with its European version (which was released a few months back and is shown above) packing all the top of the line features you’d expect in a superphone today like a fast 1 GHZ dual core processor, 8 megapixel back camera with second 2 megapixel front camera for video chat, gorgeous 4.3 inch Super AMOLED Plus screen, 16 GB of built-in storage and Android 2.3 Gingerbread with Samsung’s TouchWiz UI on top. Now the like the original US version of the Galaxy S, we expect the US carriers to customize their versions of the Galaxy S II to differentiate from the others (with different names, designs and even some feature changes like a slightly larger screen, slide-out keyboard, 4G support etc.), but seeing as Samsung’s running this event and not a particular carrier we also expect to see all 4 carriers’ versions on the 29th with releases coming hopefully not too long after that.

We’ll of course have everything you need to know about everything Samsung announces covered for you back here, so stay tuned!