Microsoft Brings Back Their Back-To-School Deal– But Is It Worth It?

Well it’s that time of year again. Yup, the school year is almost over, summer vacation is just weeks away and you know what that means: time for back-to-school deals to begin. Last year at this time Microsoft was just taking the wraps off of their back-to-school Windows PC deal and it was so good that this year their bringing it back. Yes, Microsoft will be giving away free 4 GB Xbox 360s with all new PC purchases of $699 or higher as well as a $15 upgrade to the all new Windows 8 when it comes out later this year. And like last year this deal applies to both high school and college students and all you gotta do to get this offer is show your Student ID if your buying in a store or a enter your .edu email address if you’re buying online (this is the email address your college gives you once you enroll).

Unlike last year however, this deal is available in more stores than just the Microsoft Store and Best Buy. In fact Best Buy, Dell.com, Fry’s Electronics, HPDirect.com, Microsoft Stores, and NewEgg.com are all partaking in this years deal. 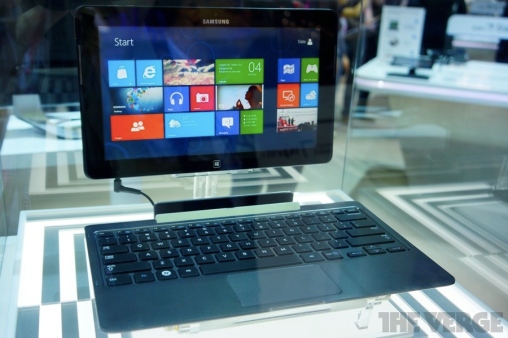 Now here’s the real question– is this deal worth it? Usually we’d say its a pretty much no brainer of a deal– I mean, you’re getting a brand new computer AND a free Xbox– but with Windows 8 coming later this year things are a bit more complicated. Windows 8 is a major upgrade over Windows 7, with one of its biggest updates being it’s completely optimized for tablets. Now that’s not to say that it doesn’t work well on “traditional” mouse and keyboard computers that don’t have touchscreens, just that later this year we can expect all new computers that look to combine the best of a tablet and a laptop (like the upcoming Samsung in the pic above. Think of it as having all the best of a tablet– apps, awesome battery life and really thin designs– combined with all the power of a normal Windows PC). So for $700-$800 you can get a full Windows computer AND a very good tablet in one.

The downside to this of course is that Windows 8 PCs and tablets aren’t expected to come out until September or October (or around the time school actually starts), so if you’re looking for a new PC we really would recommend to try to wait until then (and if you’re planning on buying a Mac we’d also recommend waiting a week as Apple is rumored to be updating its entire Mac line next Monday at their annual WWDC conference). If you need a new computer right now and can’t wait, then by all means this is stll a solid deal, if not for the Xbox then for the fact that you’ll get Windows 8 for just $15.

Again though, if you can, try to hold out a couple more months– trust us, it’ll be worth it.

Posted in Back to School, Computers, Microsoft