Are These The New BlackBerry 10 Phones?

Sure 2012 is coming to a close but that doesn’t mean we can’t start thinking about 2013. One of the biggest things to look for in 2013 is the new BlackBerry 10. BlackBerry 10 has been the long-awaited update for BlackBerry users and by most guesses, is probably the last chance Research in Motion (the makers of BlackBerry) has to avoid being finally killed off by Android and the iPhone. While we still have about a month until the full, official BlackBerry 10 unveiling (Research In Motion is planning a big BlackBerry 10 launch event for January 30th), thanks to some recent online leaks we now finally can see some of the rumored new BlackBerry 10 hardware. Meet the BlackBerry Z10 and X10.

The BlackBerry Z10 is the new all touch BlackBerry 10 phone, and it is loaded with many of the specs you’d expect in a top phone. Rumors say it will have a 1.5GHz dual-core processor with 2GB of RAM, a 4.2 inch HD screen, 4G LTE support, 16 GB or 32 GB of internal storage (with a microSD card slot for adding more), and an 8 megapixel back camera with a 2 megapixel front camera for HD video chat. 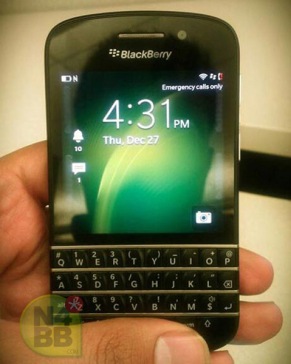 The X10 is kinda like the BlackBerry 10 version of the Bold 9900, and we gotta say, it actually looks pretty nice. Not much is known on the specs of the X10 but from the leaks it does appear to have a large touchscreen with that famous BlackBerry keyboard underneath.

The X10 is expected to be released a few weeks after the all touch Z10, though since RIM hasn’t yet announced either device– meaning these are for now all just rumors for now and can change– we don’t yet know when either will be available or how much they will cost.

Software wise RIM has kept things equally close to the vest, though they have shown off some new BlackBerry 10 features over the last few months. They have even posted some videos online of cool new camera features like Time Shift– which takes the milliseconds before and after you take a picture and allows you to adjust the photo after you actually take it to get the perfect shot– as well as a new touch keyboard. There have been also been rumors suggesting updates to apps like BBM to let you be able to video chat with other BBM users which would make sense as today anyone with BBM on a BlackBerry 7 phone can make free voice calls to other BBM users with an app update.

With so much however still unknown about BlackBerry 10 it remains to be seen if it will convince anyone to stick with BlackBerry instead of going to an iPhone, Android or Windows Phone. We’ll of course have you covered on everything Research In Motion unveils at their BlackBerry 10 event on January 30th. In the meantime, what do you think of these new phones– do they make you want a BlackBerry 10 device to be your next phone, or is it too little too late and you’re going to go with something else instead?

Videos of the new keyboard and camera, as well as a couple more pictures of the Z10 and X10 (including a possible sighting of a BlackBerry 10 Curve– it’s the white phone next to the X10 and Z10), are after the break.

END_OF_DOCUMENT_TOKEN_TO_BE_REPLACED 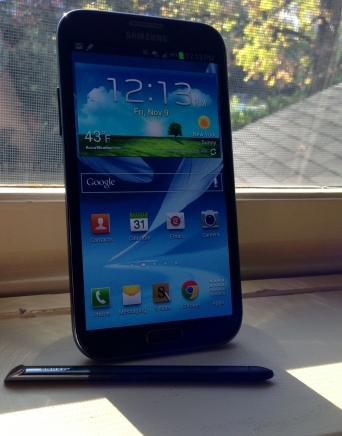 The Galaxy Note II has been one of the most anticipated phones of the year. It brings all the best of the hit Galaxy S III with an even larger screen and a pen allowing for all kinds of new possibilities.  For the last few of weeks we’ve put the Galaxy Note II through its paces and well, lets just say it lives up to all that hype, and if you’re looking for a new phone to buy with those holiday gift cards this looks to be an excellent choice.

Read on for our full teen review of the Note II.

END_OF_DOCUMENT_TOKEN_TO_BE_REPLACED

It’s Happening: The iPhone Is Officially Coming to T-Mobile In 2013

T-Mobile users, your long wait to for the iPhone is finally, and officially, coming to an end. Apple and T-Mobile today announced that starting next year Apple products, like the iPhone and iPad, will be available on T-Mobile.

The announcement was pretty vague, saying only “Apple products” and not mentioning any specific iPhone or iPad model (like the 4S, and 5). We also don’t know what time in 2013 these Apple products will arrive, though it is possible we could see a T-Mobile iPhone 5 in January or February of next year (when Verizon finally got the iPhone it came in February of 2011, several months after the AT&T iPhone 4 was announced). There also is obviously no word on if these Apple products will support T-Mobile’s upcoming 4G LTE network (which T-Mobile is also planning to launch in 2013) or just the 4G HSPA+ network T-Mobile has today.

We’ll update this post as soon as more info is available.