← It’s Happening: The iPhone Is Officially Coming to T-Mobile In 2013
Are These The New BlackBerry 10 Phones? →

The Galaxy Note II has been one of the most anticipated phones of the year. It brings all the best of the hit Galaxy S III with an even larger screen and a pen allowing for all kinds of new possibilities.  For the last few of weeks we’ve put the Galaxy Note II through its paces and well, lets just say it lives up to all that hype, and if you’re looking for a new phone to buy with those holiday gift cards this looks to be an excellent choice.

Read on for our full teen review of the Note II.

Design wise the Galaxy Note II is a mixed bag. It’s all plastic design doesn’t feel bad, but it doesn’t feel as great as the aluminum design on the iPhone 5 or unibody design of the HTC One X+. It also can get a bit slippery at times, and the plastic casing can get scratched pretty easily if it falls out of your pocket and doesn’t have a case on it. Of course when you think of the Note II you really are thinking about the screen and if this guy’s 5.5 inch screen would be too big to carry around. Well, Samsung knows this and they have done a great job at making the Note II just portable enough that we were able to hold it easily in one hand and fit it comfortably in our pockets. Of course if you have small hands this probably isn’t the phone for you. In other words, this is a phone you should definitely check out in person before you buy it. 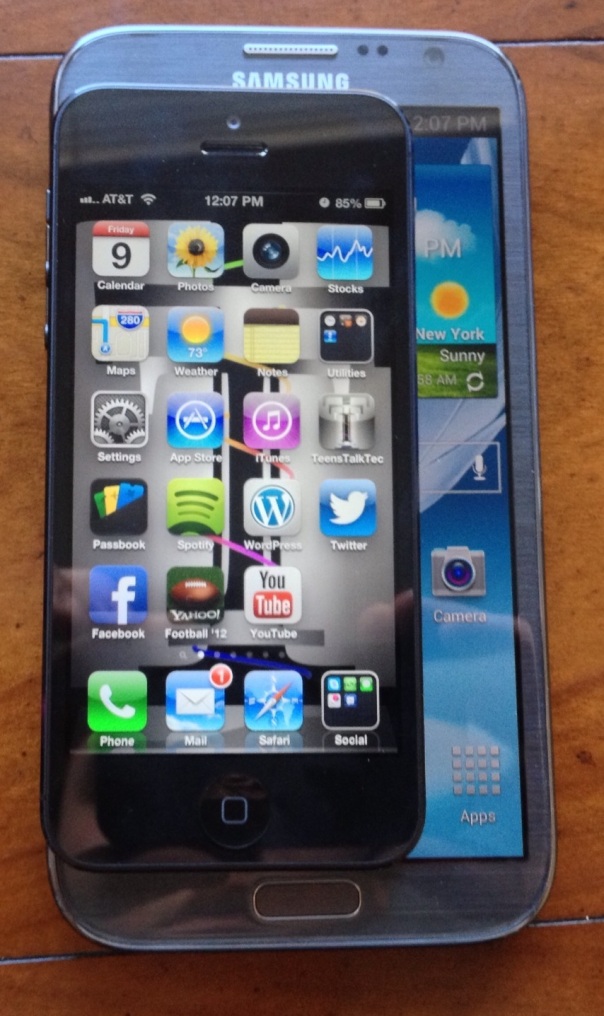 Yes, the Note II’s screen is bigger than the entire iPhone 5

Speaking of the screen, it’s absolutely amazing. Now while it isn’t as sharp as the HTC Droid DNA‘s 1080p full HD screen, it is still HD and everything we did– texting, gaming, Facebook, going online, watching YouTube– looked great on here. As we said in our first look, this wide spacious screen is so good that it took us some time to readjust to our iPhone 5’s comparatively “tiny” 4 inch screen. If you love to play games or watch movies on your phone this is perfect for you.

The Note II comes with two cameras, an 8 megapixel one on the back and a second 2 megapixel front camera for HD video chat. In our tests both cameras took some pretty solid photos and videos even in low-light. The camera on here definitely rivals the iPhone 5 and Galaxy S III’s, and that means all your photos should come out looking great. Here are a few sample shots we took (click to enlarge):

Audio and call quality on the Note II were fine, though let’s be honest, this isn’t a phone you buy for making a lot of long calls. This isn’t because of the sound, but because it just doesn’t feel right holding a 5.5 inch screen up to your face. The speaker on the Note II was equally fine, with music and videos playing back nice and clear.

The Note II  runs Android 4.1 Jelly Bean with some custom Samsung TouchWiz software on top. This means you get some great new Android features like Google Now (Google’s very good Siri competitor), as well as some Samsung apps like S Note (a note taking app– more on this in a moment), S Voice (Samsung’s not as good Siri competitor. We once asked what the weather was in New York and it gave us the weather for New York, New Mexico instead of for New York City which where we were and was what we wanted. Google Now and Siri gave us the weather for New York City) as well as access to Samsung’s Media and Music Hubs for downloading music and movies.

You also get some much appreciated Samsung tweaks like the ability to control settings like turning off WiFi, Bluetooth and GPS as well as adjust screen brightness right from the notification bar (great for saving battery), as well as S Beam, or the ability to tap your phone with another NFC-enabled Android phone like the Galaxy S III to instantly share things like videos or pictures. There also is a really cool feature called Multi-Window which lets you have things like a pop-up browser or video player while you’re in another app. This means you can watch a video or browse the web will at the same time send a text, play a game (like we’re doing in the screenshot above) or check Facebook.  This is true multitasking  and it is great on a screen this big.

And thanks to all the power in the Note II– it’s got a 1.4 GHZ quad-core processor and 2 GB of RAM– this thing easily handled everything we did.  Playing games, multitasking with dozens of apps, running two apps at once, etc.– in all our time with the Note II it never froze or lagged once. 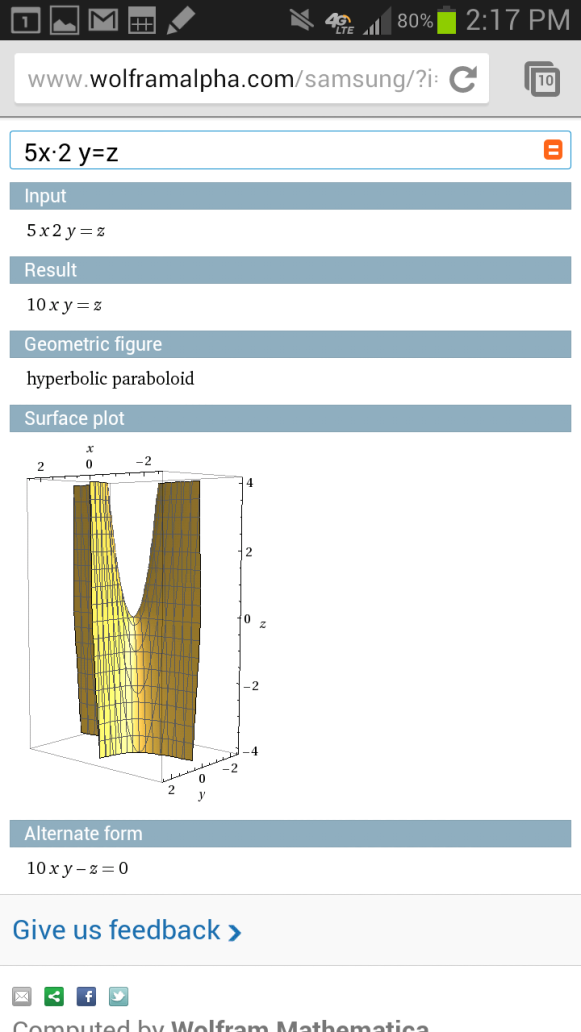 Of course next to the screen, the biggest feature of the Note II is the S Pen. The S Pen is a stylus that lets you actually write notes on the Note II. Samsung has done a great job here at making the Note II’s screen much more responsive to the stylus, and we actually were able to write on here pretty easily. That being said we did find the S Note app to be a bit difficult for taking long notes in class. Changing pages and zooming in and out to write was challenging to say the least and not as easy as just actually writing in a notebook or typing notes with a keyboard. We did though like how you can tap a function button, write in a math problem and have it answered right away thanks to Wolfram Alpha. Outside of “work” the S Pen was also a lot of fun to use for doing things like drawing and creating things like birthday cards, commenting right on pictures or even just using it to type on the Swype keyboard. 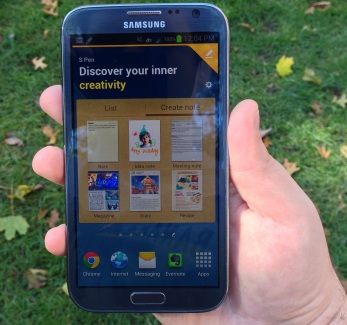 And the Note II actually notices when the pen comes out, giving you a special page on the homescreen for recommended apps and functions (something Samsung calls Page Buddy. A similar page appears when you plug-in headphones). All in all, the S Pen is a very underrated but fun part of the Note II. 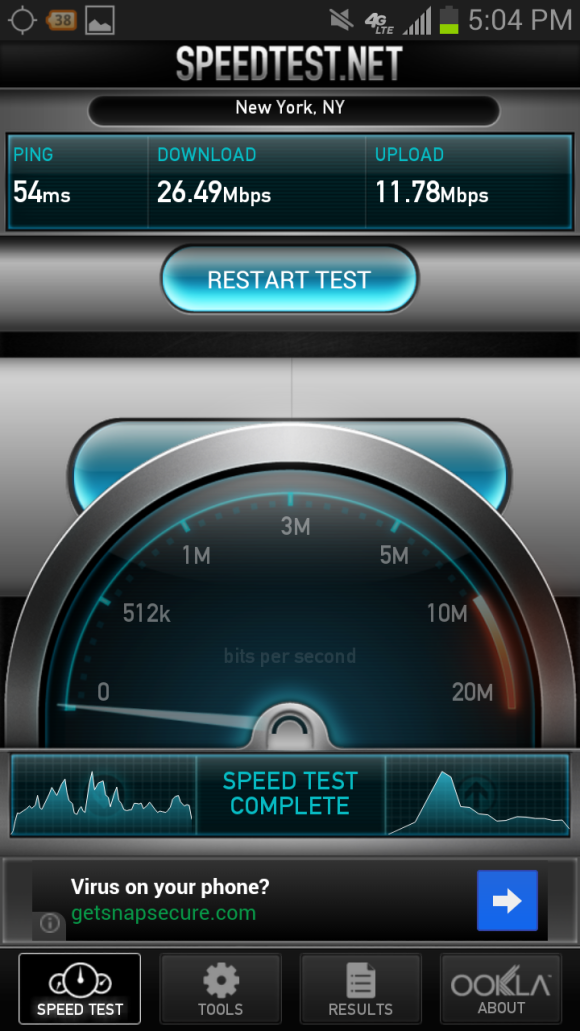 The Note II for AT&T, Verizon and Sprint comes with 4G LTE support, while the T-Mobile version has support for T-Mobile’s 4G HSPA+ network. Our Note II was an AT&T version, and like all AT&T LTE phones, its speed was amazing. On average around the New York area we saw 4G LTE download speeds between 10-30 Mbps and upload speeds of 5-15 Mbps. In other words, speeds that were much faster than most home internet connections. Videos loaded instantly in HD and never buffered or lagged, apps downloaded in seconds and the music we streamed sounded crystal clear. 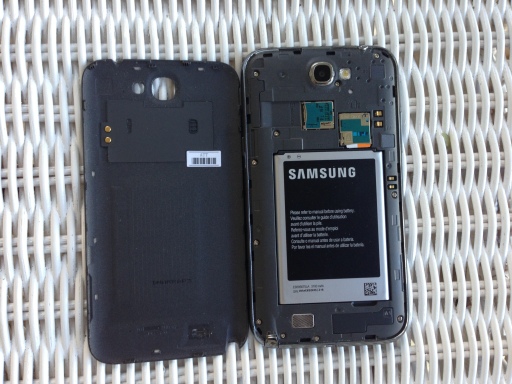 With everything in here– the quad-core processor, 4G LTE, S Pen, and of course, that huge 5.5 inch HD screen– we had no idea what to expect from the Note II for battery life. Put simply, it blew us away. We were able to easily get through days even while doing intense tasks like streaming music, playing games, watching YouTube, texting, and constantly being online. We often even ended those days with plenty of battery to spare.  You should probably still charge a little every night to be safe, but this thing should easily get you through the day. 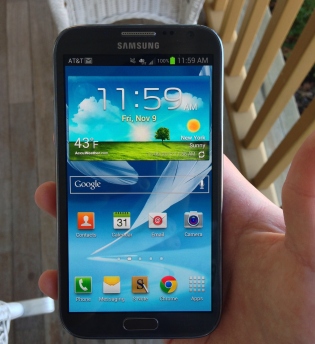 We really love the Note II. It’s feels great in the hand, packs some cool unique features and runs extremely well. In our opinion it is one of the best phones available today, right next to the iPhone 5, HTC Droid DNA and of course, the Galaxy S III. If you love to watch movies, play games or just want a great phone that’s also a solid mini-tablet then you’ll love this. Now the Note II’s greatest strength is also its biggest weakness. As much as we loved the Note II giant screen, it’s not for everyone and for a lot of people we showed it to this was the number one reason they wouldn’t get it. This really is a very big phone.

Of course, if the size is not an issue, and you’re looking for a great new phone to buy with those holiday gift cards we really think that anyone who gets this phone will love it.

← It’s Happening: The iPhone Is Officially Coming to T-Mobile In 2013
Are These The New BlackBerry 10 Phones? →