← Sony’s Shows Off The Future Of PlayStation– Meet the PlayStation 4
Deal of the Day: Microsoft Letting Students Try Office 365 For Free For 3 Months → 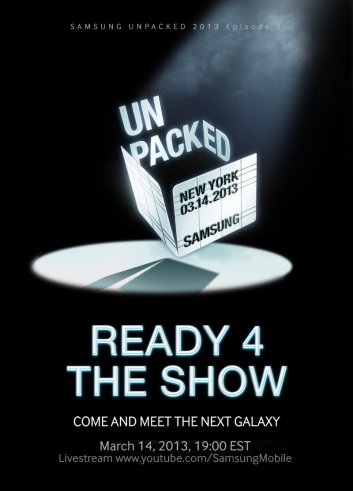 March was already shaping up to be a big month for new phones with the US launches of the BlackBerry Z10 and HTC One, but it now looks to be getting even crazier.

It has been rumored for months, and many (ourselves included) expected it to not come for another few months, but the new next big thing is on its way. Yes, Samsung late last night tweeted a teaser for their first big “Unpacked” event of 2013, set for March 14th in New York. The Samsung Unpacked events have usually been used only to announce major products– last year it was used for the Galaxy S III, Note 10.1 and Note II– and as seen by the “4” in the tweet and invite it seems that this Unpacked will be for yet another major product, the Galaxy S IV.

Like with the S III last year rumors on what will be new in the Galaxy S IV have been all over the place, but one constant rumor is that it will have a slightly larger 5 inch 1080p full HD screen (a nice upgrade over the S III which had a slightly smaller, not as sharp 4.8 inch screen). Otherwise not much is known about what will be new with the S IV, but stay tuned. The wait for the new next big thing is almost over.

← Sony’s Shows Off The Future Of PlayStation– Meet the PlayStation 4
Deal of the Day: Microsoft Letting Students Try Office 365 For Free For 3 Months →