← The Facebook Phone Is Coming Today- Here Are Some Of The Latest Rumors On What We Can Expect
Could The Next Xbox Be Announced Next Month? →

HTC First, Facebook Home- What You Need To Know From Facebook’s Android Event

As was expected, Facebook last week unveiled some of their new plans for Android including a new Facebook phone called the HTC First and more importantly, a major update to their Android app called Facebook Home.

Both the First and Facebook Home will be available later this week– on Friday, April 12th– but here is what you are going to need to know about both before they get here.

As was long rumored, HTC and Facebook have teamed up again on a new Facebook phone, the HTC First. Coming to AT&T this Friday, April 12th, for $99.99 with a new 2 year contract, the First is pretty much everything we expected. It’s a sleek-looking Android phone with a 1.4 GHZ dual core processor with 1 GB of RAM, 4.3 inch 720p HD screen, 5 megapixel back camera with 1.6 megapixel front camera for video chat, and LTE support. Again, it isn’t the most powerful phone you could buy (the Galaxy S III is also $99.99 on contract at AT&T), but it should be fine for using apps like Temple Run, Twitter, Instagram, Snapchat and doing most of the things you would use your phone for. Also as expected, the First will be available in four colors: cyan, black, white and red.

Now what makes the First a “Facebook Phone” is the software it’s running, something called Facebook Home.

On current Android phones from manufacturers like Samsung, HTC, Motorola and LG the home screen is usually some custom software referred to as a skin. These “skins” help separate a Samsung Galaxy III from an HTC Droid DNA or Motorola RAZR Maxx even though all three are running Android. All these skins modify what Google has done with Android to help give each phone their own unique looks and help make them stand out from the other Android phones (the icons look different, different widgets etc.). With Facebook Home, Facebook wants to completely change the Android home screen and turn it into a rotating hub of your Facebook friends’ latest pictures and posts. Even the lock screen on your phone will update with those latest feeds, making it so that from the second you turn on your phone you are right on Facebook. You can even tap to like or comment right from the home screen/lock screen.

Facebook Home isn’t just an app, it basically is turning your regular Android phone into a Facebook phone. Even the menu where you launch apps has been changed to allow you to update your status or post a photo without having to open the actual Facebook app. Don’t worry, you can still use all your Android apps even with Facebook Home installed, and if you don’t like Facebook Home you can also uninstall it like you would any other Android app. 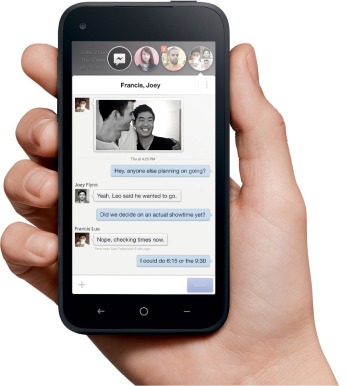 Now one thing that looks really cool and actually useful about Facebook Home is something Facebook calls Chat Heads. These are little circles that appear on the screen to let you know that someone messaged you using Facebook Messenger. To see and reply to the message just tap the circle and you can reply right there on the spot without opening the Messenger app or leaving whatever app you’re in. When you’re done just tap to circle again and you’re right back in your app. You can also move the bubbles around or just drag them to the bottom to get rid of them. On the HTC First the Chat Heads work with regular text messages as well.

So there you have it, all the info you’re gonna need to know about Facebook Home and the HTC First. While we need to actually spend time with Facebook Home before we can say if we recommend it, personally I am a bit skeptical about using it daily on my phone. This is taking Facebook out of the app and putting right up in your face. It’s Facebook 24/7. And while I use Facebook, I don’t want or need it to be the first thing I look at every time I look at my phone. It all seems a bit too overwhelming. Plus the last thing I want is to turn on my phone and see an ad from Facebook (which seems inevitable. Remember, ads are how Facebook makes money).

In fact the only feature I really want from Facebook Home are the Chat Heads. Ironic given how that is the one feature of Facebook Home that is extremely subtle.

But those are just my thoughts based on what Facebook showed off. What about you– are you into Facebook enough that you want to turn your phone into an all-out “Facebook phone?” Do you plan to download Facebook Home on Friday or are you fine with just the regular Facebook Android app? Let us know in the comments.

← The Facebook Phone Is Coming Today- Here Are Some Of The Latest Rumors On What We Can Expect
Could The Next Xbox Be Announced Next Month? →