← The iPhone 5 Comes To T-Mobile Tomorrow– Are You Getting One?
Samsung Galaxy S4 and HTC One Release Dates- What We Know So Far →

It’s Here: The iPhone 5 Is Now Available At T-Mobile 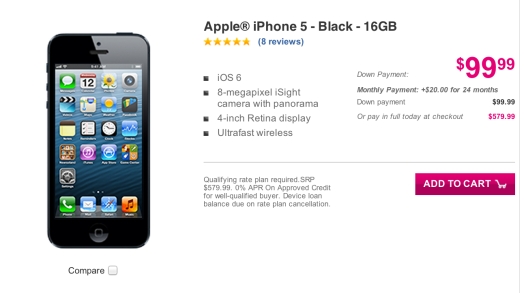 T-Mobile users, you can now buy the iPhone 5. As we wrote yesterday, the iPhone today has finally come to T-Mobile and it is available to buy now at T-Mobile stores or online at T-Mobile’s site. Pricing for the iPhone 5 starts at $99 down (with $20 monthly payments for two years) for the 16GB version, with the 32GB and 64 GB versions costing $199 and $299, respectively (also with $20 monthly payments for two years). If you want to buy full price– remember, T-Mobile doesn’t do two-year contracts anymore– you can for either $580, $680 or $780 depending on if you get the 16GB, 32GB or 64GB iPhone 5.

Now if you look at T-Mobile’s site you will notice that the iPhone 4 and 4S are listed, but depending on where you live you might not be able to actually buy either one. The reason for this is that the 4 and 4S don’t have the right chips inside to fully support T-Mobile’s 4G network. Ever since the first iPhone launched in 2007, all unlocked iPhones could be used on T-Mobile’s network. While they all could work, those phones only could use T-Mobile’s 2G network and not it’s fast 4G one. This had to do with fact that the iPhone didn’t support the right radio band needed to use T-Mobile’s faster networks (known as the 1700 MHz band).

To buy the iPhone 5 head on over to the T-Mobile’s site. For all the info on T-Mobile’s new plans and info on their 4G LTE network see our earlier post here.

← The iPhone 5 Comes To T-Mobile Tomorrow– Are You Getting One?
Samsung Galaxy S4 and HTC One Release Dates- What We Know So Far →