← It’s Here: The iPhone 5 Is Now Available At T-Mobile
Here We Go: Microsoft Set To Reveal Next Xbox on May 21 → 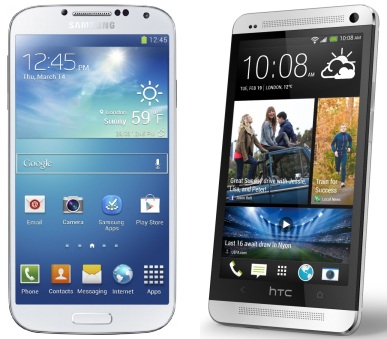 If you’re looking for a new Android phone or have an upgrade coming up odds are you’ve narrowed your choices down to either the Samsung Galaxy S4 or HTC One. Both are very impressive phones with amazing 1080p HD screens, super fast quad-core processors, powerful cameras and interesting software features like the ability to become a remote for your TV. And best of all– both phones either are, or will be, available very soon.

We know that there’s a lot of interest in both of these beasts, so here’s a quick roundup on when they will be available at your carrier and how much it will cost you to get one. 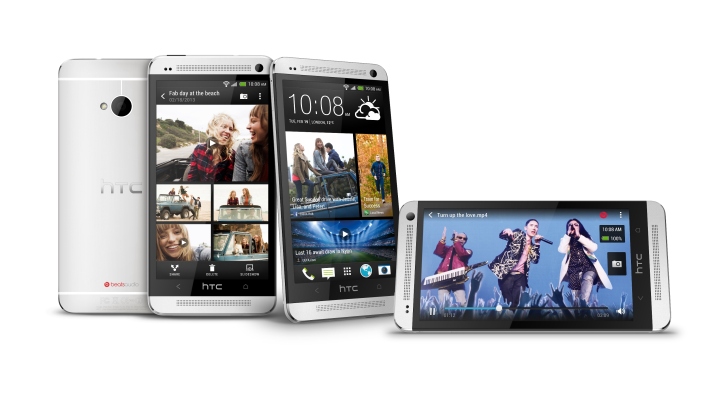 The HTC One was announced a few weeks before the Galaxy S4 and it likewise is the first on shelves. The white 32GB One is available now on Sprint and AT&T for $199.99 with a new two-year contract (for those who want the extra storage space, AT&T is also selling an exclusive 64GB version of the One for an extra hundred bucks). For those who would prefer the One in black, you’d be pleased to know that both carriers will also sell a black version soon as well.

T-Mobile users will be able to order the 32GB One online today, with the official release date set for this Wednesday, April 24th. T-Mobile’s One will be priced similar to their 16GB iPhone 5, $99.99 down payment with $20 monthly payments for 24 months (remember, T-Mobile no longer offers two-year contracts).

For those on Verizon wondering about the HTC One, while there have been some rumors, as of now Verizon has not yet announced any plans to sell HTC’s latest and greatest.

While there were a few weeks between the announcement dates for the One and S4, when it comes to release dates things are a lot closer together.

Unlike the HTC One, all four big carriers– AT&T, Verizon, Sprint and T-Mobile– will sell the Galaxy S4 in 16GB and 32GB versions, with T-Mobile the first carrier out of the gate. Beginning this Wednesday, April 24th, T-Mobile will start selling the S4 online (it will be in T-Mobile stores starting on May 1st). Pricing for the T-Mobile S4 will start at $149.99 down with $20 monthly payments for 24 months.

Sprint and AT&T are the next two carriers to sell the S4 and both have it available for pre-order on their sites right now. Sprint’s Galaxy S4 starts at a slightly more expensive $249.99 with a new two-year contract and will begin shipping out and be available in stores starting Saturday April, 27.

AT&T’s S4 is also available for pre-order and will be shipping three days after Sprint’s launch on April 30th (though some may get it earlier). The good news for AT&T users is that their S4 will be $50 cheaper than Sprint’s, launching at $199.99 with a new two-year contract.

As for Verizon, well you’ll have to wait a little longer. Verizon will get the S4, though unlike the other big carriers they haven’t announced exact pricing or a release date. They have however tweeted that their S4 will be available sometime in May. We’ll pass along more info on this once we get it.

For more info on what’s new and so impressive about each phone, see our earlier posts here (HTC One) and here (Galaxy S4).

← It’s Here: The iPhone 5 Is Now Available At T-Mobile
Here We Go: Microsoft Set To Reveal Next Xbox on May 21 →