iPhone 5S and iPhone 5C: What’s New and What You Need To Know

As you’ve heard, this week Apple unveiled not one but two new iPhones, the long rumored iPhone 5C and iPhone 5S. From all the rumors and leaks it seems that we’ve seen everything with these phones months ago but this week Apple made it all official.

Both the iPhone 5S and 5C go on sale next Friday (and the 5C is available for pre-order tomorrow), but to help you decide on which iPhone is right for you we’ve rounded up everything that’s new and what you need to know about in each phone below.

The iPhone 5S is the successor to the now discontinued iPhone 5 (Apple replaced the iPhone 5 with the 5C). Like the 3GS and 4S before it, the iPhone 5S keeps pretty much the exact same design as the iPhone that came before it but adds in some nice spec upgrades and a couple of cool new features. For the 5S, this means a much faster A7 processor, a better camera and of course, the fingerprint sensor on the home button.

Let’s start with the processor. Like all “S” iPhones Apple gave the 5S a very nice speed boost. The new A7 processor is 2x as fast as the iPhone 5’s A6 processor in both performance and graphics which means that everything you do on your phone will be a lot quicker and the games you play will look much better (and the iPhone 5 was pretty fast already). Now for those worrying that this new power will mean less battery, well you shouldn’t. Remember all those rumors about a bigger battery in the 5S? Well, that plus a new M7 chip (designed to help take some of the load off the A7 and make it more battery-efficient) should help keep the 5S’s battery on a similar level to the battery life of the 5.

Beyond the speed, Apple added a few nice features to camera on the 5S. While the camera is still 8 megapixels, there is a lot more to taking good pictures than just megapixels. Apple has made the pixels and the camera’s sensor larger than they were on the 4S and 5, which means your pictures will look a lot better since more light is being let in. Apple also added a new flash to the back of the 5S, a “amber” light that together with the regular white flash will mean that pictures you take in low lit areas will come out looking a lot more normal looking (something Apple is calling True Tone flash). Here’s a comparison of a shot taken with a normal, single light flash next to one with the new True Tone (click to enlarge): 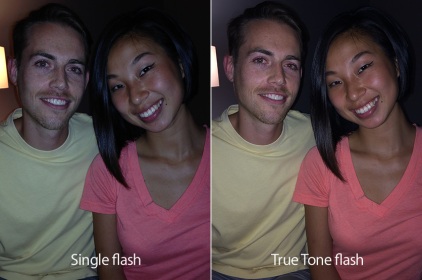 On top of the new flash and better sensor Apple also took advantage of the new A7 chip and made auto-focus faster on the 5S and added a new 120 FPS “slo-mo” mode to the camera app that will let you, well slow down parts of the video to make a cool action scene. The front FaceTime camera got an upgrade too and now takes better photos and video for better selfies and HD FaceTime chats.

Last but not least the 5S added on new hardware feature– the Touch ID fingerprint sensor. Located right in the home button you’ll be able to do things like unlock your iPhone and buy things from iTunes and the App Store without having to type in passwords. One of the most annoying things about the App Store is how you constantly need to enter in your password and this is a really cool and secure way to get around that.

Otherwise, the iPhone 5S has pretty much everything the iPhone 5 had. It has pretty much the same design (so iPhone 5 cases will fit on it though not perfectly because of the larger camera sensor and flash), same 4-inch Retina display, Lightning port, and runs iOS 7. All that being said it’s a pretty nice upgrade and if you’re looking for a new iPhone is probably the one to buy.

So now that we covered the 5S let’s move to the iPhone 5C, or the more colorful, plastic iPhone 5. Unlike the 5S the iPhone 5C didn’t see as many internal hardware upgrades and is pretty much the iPhone 5 inside a new, much more colorful case. With the exception of the new FaceTime HD camera that the iPhone 5S has, it’s pretty much same phone as the iPhone 5. Same iOS 7, A6 processor, 8 megapixel camera (without the bigger sensor and better flash), and 4-inch Retina display.

Now there is that “C” in the name and as you could guess it stands for color. Unlike the iPhone 5S which comes in just black, white or gold, the iPhone 5C comes in five different colors– blue, green, pink, yellow and white. And it looks nice. If you wanted a colorful iPhone or just don’t need all the new features of the 5S, this is for you. Apple also has come out with a bunch of cases for the 5C in a variety of colors to help you make it even more of your own.

So, do these new iPhones impress you, and if so which are you gonna get?