Earlier this month Samsung  unveiled the Galaxy Note 3 and new Galaxy Gear smartwatch. The Note 3 is the highly anticipated follow-up of last years Note 2, while the Galaxy Gear is a “smartwatch” that, when paired with the Note 3, does a lot more than just tell the time. Both are very impressive but the one you’re gonna care about most right now is the Galaxy Note 3, and if you’re looking for a new Note you’ll be happy to know that this looks like it’s a very worthy successor to the Note 2. 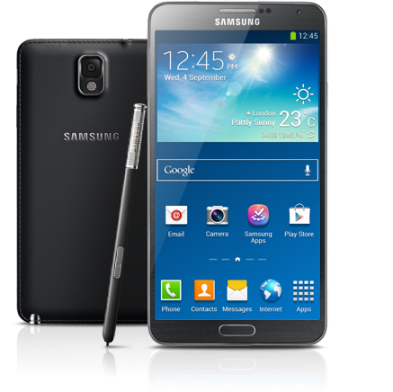 Like the Note 2, the Note 3 is fully spec’d with everything you’d expect in a new 2013 superphone. It’s got a 5.7 inch 1080p HD screen (which is larger and much sharper than the Note 2’s 5.5 inch 720p screen), a super fast 2.3 GHZ quad-core processor with 3 GB of RAM (basically this thing is crazy fast), and a 13 megapixel back camera with 2 megapixel camera on the front for HD video chat and doing things like Dual Camera. The Note 3 is also slightly thinner than the Note 2 and packs a larger battery which hopefully will mean even better battery life than the Note 2’s (which was already pretty great). 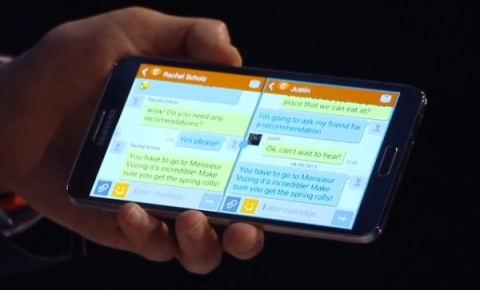 The Note 3 runs Android 4.3 and brings along improvements to Samsung’s custom software like S-Pen and Multi-Window that make them much more useful. Just clicking the side of the S-Pen and hovering over the screen will now bring up Air Command, a small wheel that let’s you quickly get to S-Pen features like Action Memo and taking screenshots no matter what you’re doing. Multi-Window meanwhile now lets you now open the same app twice, so you can open up the messaging app and text multiple people in different conversations at the same time (like you see in the pic above) without having to go back and forth between them. This is a great way to take advantage of the Note 3’s huge screen.

The Note 3 will come in either black, white or pink, though like with the Galaxy S4 Samsung has a bunch of different backs and covers to let you change that up if you so choose. All in all, the Note 3 is a pretty powerful beast. 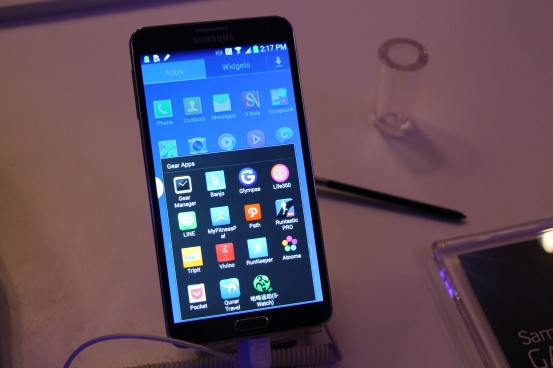 We had a chance to check out the Note 3 in person and we gotta say it’s one impressive phone. The screen looked fantastic, everything opened up super quick and the camera in our brief time with it took nice pictures. We also really liked the improvements Samsung has made to multitasking. We were able to open two different conversations in Samsung’s ChatOn app (Samsung’s version of iMessage/WhatsApp/BBM) at the same time. This is a great and actually useful way to take full advantage of the power and large screen of the Note 3. S-Pen is also much better and now can better recognize what you write and convert it instantly into things like typed text or even a new contact, another nice improvement that worked pretty well in our time with the phone. The Note 3’s new leather back also felt great in our hands, though as with the original Note and Note 2 this phone is massive and if you’ve got small hands it probably isn’t the phone for you.

Now Samsung also announced the Galaxy Gear smartwatch accessory for the Note 3, and while it has a lot of potential, right now it’s not as impressive as the Note 3. The Gear is basically Android in a watch, with a 1.6 inch touchscreen that will display calls, texts and other notifications, let you talk to Samsung’s S Voice (their version of Siri/Google Now), control what music is playing on your phone, answer calls using the built-in mic and speaker, and even take pictures using the 1.4 megapixel camera that’s on the wristband. Samsung’s also working with developers like Snapchat, Pocket and Evernote to create apps for the Gear. It will be available in six colors (black, grey, orange, beige, gold and green) when it launches with the Note 3 next month.

For now it also only will work with the Note 3 so you’re out of luck if you’ve got the Galaxy S4 or any other Android phone. but that’s not the the Gear. The biggest problem is it’s price. If you want one it’ll cost you an additional $299 on top of the $300 the Note 3 costs. $600 with a contract is a lot to spend on a phone, even one as cool as the Note 3 and Gear.

The Note 3 and Gear will be coming to AT&T, Verizon, Sprint and T-Mobile in the coming weeks. The AT&T version will be available on October 1st while Verizon’s Note 3 is listed as “shipping by October 10th.” Both will cost $300 with the usual new 2 year contract. T-Mobile will launch the Note 3 on October 2nd and will charge $100 less– $199.99 with 24 monthly payments of $21. Sprint has yet to announce exact pricing or release dates but we’ll of course let you know when they do. The Gear will be available at all the carriers for $299.

For more info and to pre-order for you’re carrier can be found here  (AT&T, Verizon, Sprint, T-Mobile).