Stuck on the BBM Wait List? Just Ask a Friend For Help

The demand for BBM for iPhone and Android has been insane. Since it’s release on Monday the app has been download over 10 million times and has quickly shot up to the number two spot in the iTunes App Store. Of course all this demand hasn’t been all good news, it’s forced BlackBerry to use a wait list after too many sign ups on a beta version of the Android app delayed the release a few weeks ago. And while the long wait is tough for those looking to get back into BBM, there have been some tips that tried to help you get past the wait. CNET found one where you have to open and then force close the app but we found one that we think is simpler. Just ask a friend who already got into the app to for the email address they used to sign up. 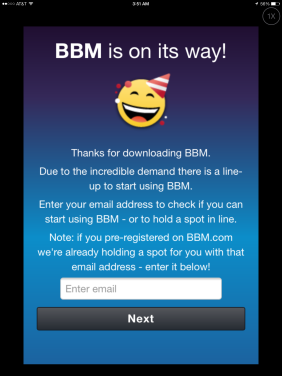 Here’s where you enter your friend’s email address

And don’t worry, this does nothing to affect your friend’s email or their BBM. This just gets you into the app and from there you can create your own BlackBerry ID with your own email address. We’ve tested this a few times using BBM for iOS on an iPad and iPhone 5S using multiple email addresses and each time it worked perfectly. 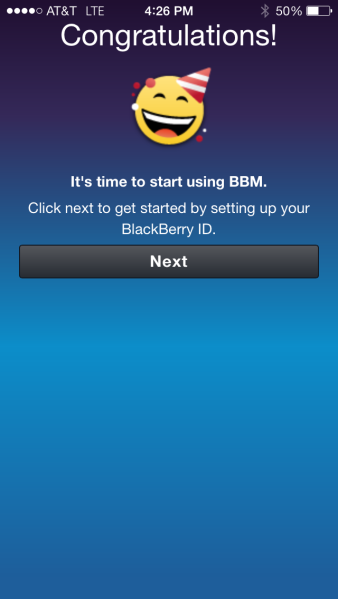 Now as for finding those friends who already got in, odds are you’ve probably already seen them post their new PINs on Facebook, so just message them and see if they can help you out.

One of the biggest problems facing Windows Phone and Windows 8 are the lack of popular apps. Sure Windows Phone has over 175,000 apps available but many of the most popular ones found on Android and iOS have been missing. Official apps for Instagram, Vine, and Flipboard were some of the most notable missing apps and while there were third party apps that gave some of the features to replace those apps, they didn’t always offer the full experience and were at risk of being shut down by the official apps. Well, the wait for these apps is almost over. Today in Abu Dhabi Nokia announced that in the “coming weeks” Instagram, Vine, Flipboard and Temple Run 2 will all be coming to Windows Phone.

We don’t have exact release dates for any of these apps but this is big news for Windows Phone users. Nokia already makes one the best phone cameras out there with the 41-megapixel Lumia 1020, and having two of the most popular photo and video apps in Vine and Instagram will only make it better by making it much easier for people to share what they shot.

In addition to the above four, Nokia also announced that other popular apps like FIFA 14 and Papyurus will also be coming to Windows Phone over the next few weeks. And while these apps don’t solve all the app problems with Windows Phone, they sure do help a lot.

It’s Here: BBM Is Now Available For iPhone and Android

It’s finally, finally here. After long waits and many delays BlackBerry has finally released BBM for iPhone and Android, and unlike in September this time it looks like it’s here to stay. The app is free and you can get it from the Google Play Store or the App Store. It will work on Android phones running Android 4.0 and up as well as iPhones, iPads and iPod Touches running iOS 6 or iOS 7.

Once you download the app you’ll need to sign in with your BlackBerry ID (if you don’t have one or don’t remember it you can also create a new one). If you signed up at BBM.com over the last few months you should be good to go from there and can enjoy BBM on your non-BlackBerry. If you didn’t you may have to wait a bit as BlackBerry is trying to avoid the problems of rapid sign-up that caused the most recent delays by slowly letting new users into the app. Sadly there’s no counter in the app to let you know where you are in line, but from what we’re hearing the “line” to get into BBM is moving pretty quickly. And if you don’t have the patience to wait there are already a few “hacks” popping up to get you in right away as CNET has found.

So what are you waiting for? Go download the app and get back to BBMing.

BBM For iPhone and Android Delayed Until At Least Next Week 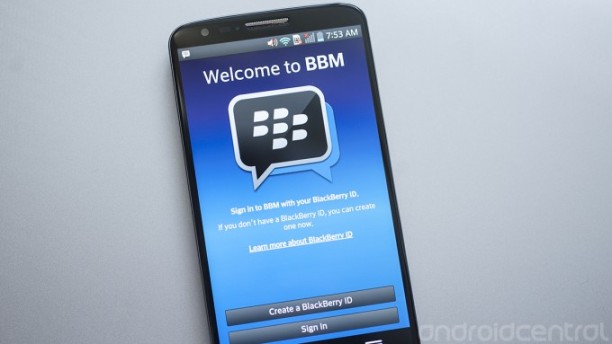 We’ve got an update on the delay of the BBM apps for Android and the iPhone and it’s not good. On Monday BlackBerry’s head of BBM, Andrew Bocking, posted an update to the company’s Inside BlackBerry blog on the status of the now paused roll out of the BBM apps, and well, things are a bit more complicated than everyone thought. Basically, they’re complicated enough for BlackBerry to postpone the roll-out of the iPhone and Android BBM apps until at least next week. Bocking did not give any information beyond that for when the launch would be restarted, just saying that fixing the issues “will take some time and I do not anticipate launching this week.”

The problem causing these delays is with an unreleased version of the Android app that had a few bugs in it but still made its way online. 1.1 million people downloaded that app within eight hours causing some problems for BlackBerry’s servers. Whatever issue there was with that unreleased app has been fixed in the official version, but BlackBerry is now blocking that unreleased app and trying to make sure that their servers are ready for the amount of traffic that will hit them once the official app launches. So while it may be a little longer until you can return to BBM, hopefully this will mean a better experience once you do.

We’ll continue to keep you updated on the status of BBM for Android and iPhone, but in the meantime you can head on over to the BBM site and sign-up to be notified when the apps are ready to go.

We already knew when AT&T, Verizon and T-Mobile were getting the new Galaxy Note 3 and Galaxy Gear smartwatch and now we know when Sprint will be getting them too. Sprint announced that they will begin selling the Note 3 and Gear on October 4th, with the Note 3, available in either black or white, costing $349.99 with a new 2 year contract and the Gear an extra $299.99. Unfortunately this means that Sprint’s Note 3 is $50 more expensive than the AT&T and Verizon versions and $150 more expensive than the T-Mobile version (the Gear is $300 at all the carriers).

For those who don’t know, the Note 3 is the fully spec’d successor to the Note 2. As you’d expect, it’s got everything you’d expect in a new 2013 superphone: a 5.7 inch 1080p HD screen (which is larger and much sharper than the Note 2?s 5.5 inch 720p screen), a super fast 2.3 GHZ quad-core processor with 3 GB of RAM (basically this thing is crazy fast), and a 13 megapixel back camera with 2 megapixel camera on the front for HD video chat, selfies, and doing things like Dual Camera. The Note 3 is slightly thinner than the Note 2 and packs a larger battery which hopefully will mean even better battery life than the Note 2’s (which was already pretty great). It also runs Android 4.3 with some improvements to Samsung’s custom software like a better Multi-Window mode.

The Galaxy Gear meanwhile is Samsung’s first Android smartwatch and can do things like run apps, take pictures, let you know what new notifications you have and of course, tell you the time. We saw both the Note 3 and Gear in person and while we were impressed with the Note 3, at $300 the Galaxy Gear– while very cool– doesn’t seem to be worth the money just yet.

For more info on the Sprint Note 3 head to Sprint’s site here.

While this was supposed to be the weekend for BBM to finally hit Android and the iPhone it now looks it was all a false start. BlackBerry did plan on releasing the app for both platforms this weekend, but due to a mix of demand and an unreleased Android app (like the one from the pic above) BlackBerry has paused the rollout until further notice.

According to a post on their Inside BlackBerry blog, an unreleased version of app was posted online and downloaded a pretty incredible 1.1 million times in the first eight hours of being available. But that app, as unreleased apps often do, had some issues. While BlackBerry is trying to fix those issues, they decided to pull the app from both the App Store and Google Play Store in the interim. For those who managed to download an official version of the app, BlackBerry also confirmed that those has already downloaded the official BBM for iPhone app will be able to continue to use it, though BlackBerry will disable the BBM for Android app until they can re-release the official version in the Play Store. Regular BBM for BlackBerry will continue to work just fine.

No word on when BlackBerry will restart the roll-out or when it will hit the US, but we’ll let you know here once they do.

BBM Is Coming To Android and the iPhone This Weekend 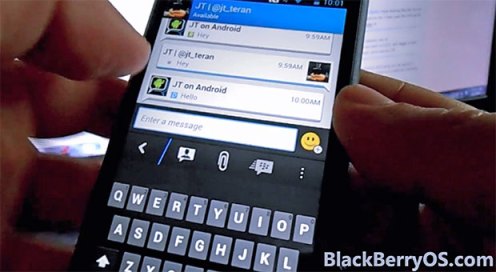 BBM for iPhone and Android brings many of the BBM features you know and love including single person and group chats, the ability to share photos and voice notes, a unique BBM PIN etc. The Android version even allows you to add a BBM contact using NFC just by just taping your phone with your friend’s (assuming you both have Android/BlackBerry 10 phones with NFC). You yet be able to do video chats, screen share or BBM voice calls, but BlackBerry has said that those features would be coming as updates in a “future version.”

So are you excited for this or have you moved on already to iMessage/WhatsApp/something else? 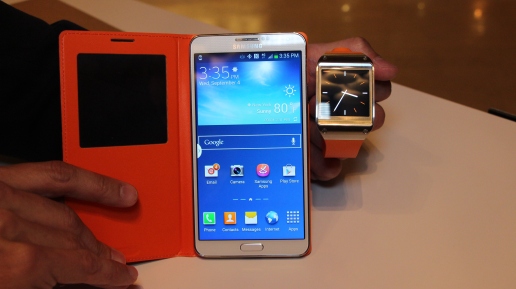 Earlier this month Samsung  unveiled the Galaxy Note 3 and new Galaxy Gear smartwatch. The Note 3 is the highly anticipated follow-up of last years Note 2, while the Galaxy Gear is a “smartwatch” that, when paired with the Note 3, does a lot more than just tell the time. Both are very impressive but the one you’re gonna care about most right now is the Galaxy Note 3, and if you’re looking for a new Note you’ll be happy to know that this looks like it’s a very worthy successor to the Note 2.

END_OF_DOCUMENT_TOKEN_TO_BE_REPLACED

iPhone 5C Pre-Order: All The Details

The iPhone 5C goes on pre-order tonight at around 3:01 AM Eastern Time (or 12:01 AM for those on the West Coast). All the major carriers will sell the iPhone 5C and all will be taking pre-orders starting tonight. If you’ve been waiting for the 5C here are all the details on where you can pre-order one of the newest iPhones.

END_OF_DOCUMENT_TOKEN_TO_BE_REPLACED

iPhone 5S and iPhone 5C: What’s New and What You Need To Know 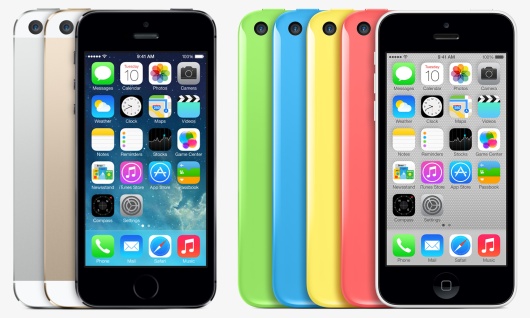 As you’ve heard, this week Apple unveiled not one but two new iPhones, the long rumored iPhone 5C and iPhone 5S. From all the rumors and leaks it seems that we’ve seen everything with these phones months ago but this week Apple made it all official.

Both the iPhone 5S and 5C go on sale next Friday (and the 5C is available for pre-order tomorrow), but to help you decide on which iPhone is right for you we’ve rounded up everything that’s new and what you need to know about in each phone below.