It’s Official: The HTC One Is Finally Coming To Verizon On August 22nd 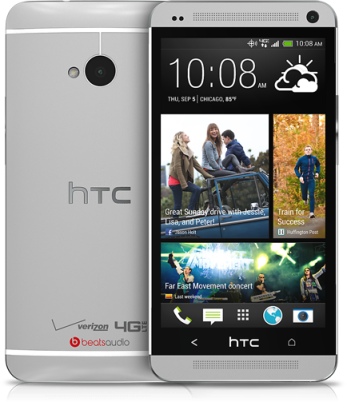 Well, Verizon and HTC have held true to their promise after all. They said the HTC One would be coming to Verizon before the end of the summer and today they made it official. Next week, on August 22nd, the HTC One will finally be available on Verizon for $199.99 with a new 2 year contract– just in time for a last-minute upgrade before school starts.

For those who don’t know, the HTC One is one of the best phones available today. It’s got a beautiful all metal design, super fast quad-core processor, 4.7 inch 1080p HD screen, Android 4.2 Jelly Bean, an IR blaster (for using this as a TV remote), HTC’s new ultrapixel camera, and built-in Beats Audio support with dual front speakers for incredible sound. If you’re looking for a new phone today this is a pretty great option.

Of course, with phones like the Moto X, Droid Maxx, iPhone 5S and Galaxy Note 3 rumored to be coming to Verizon in the not too distant future, it may be worth waiting a couple more weeks before signing that new 2 year contract.

Yesterday we covered some of the best new and upcoming phones coming to AT&T and now it’s Verizon’s turn.

For most of 2013 Verizon has been pretty quiet on the new phones they’ve launched. I mean, the only big phones they’ve released so far are the BlackBerry Q10 and Samsung Galaxy S4. But that all looks to change very soon. If you’re on Verizon and have an upgrade coming up sometime over the next couple of weeks or months these are some of the best phones either already at Verizon or rumored to be coming to a Verizon store near you very soon. The last thing you want is to go out and buy something only to really regret it a week later.

END_OF_DOCUMENT_TOKEN_TO_BE_REPLACED

For most of 2013 Verizon has been pretty quiet on the new phones they’ve launched. But that all looks to change very soon. If you’re on Verizon and have an upgrade coming up sometime over the next couple of weeks or months these are some of the best phones either already at Verizon or rumored to be coming to Verizon very soon. The last thing you want is to go out and buy something only to really regret it a week later.

END_OF_DOCUMENT_TOKEN_TO_BE_REPLACED

If you’re looking for a new Android phone or have an upgrade coming up odds are you’ve narrowed your choices down to either the Samsung Galaxy S4 or HTC One. Both are very impressive phones with amazing 1080p HD screens, super fast quad-core processors, powerful cameras and interesting software features like the ability to become a remote for your TV. And best of all– both phones either are, or will be, available very soon.

We know that there’s a lot of interest in both of these beasts, so here’s a quick roundup on when they will be available at your carrier and how much it will cost you to get one.

END_OF_DOCUMENT_TOKEN_TO_BE_REPLACED

HTC First, Facebook Home- What You Need To Know From Facebook’s Android Event

As was expected, Facebook last week unveiled some of their new plans for Android including a new Facebook phone called the HTC First and more importantly, a major update to their Android app called Facebook Home.

Both the First and Facebook Home will be available later this week– on Friday, April 12th– but here is what you are going to need to know about both before they get here.

END_OF_DOCUMENT_TOKEN_TO_BE_REPLACED

Later today, Facebook will be holding a big event to showcase their “new home on Android.” While there has been a lot of speculation about what exactly Facebook will show off, thanks to some recent rumors it looks like we now have a pretty good idea. Yes, Facebook isn’t just announcing an update to their Facebook Android app, they also are expected to announce the Facebook phone to go along with it.

Before the event gets underway at 10 AM Pacific Time, here are some of the latest rumors on what we expect Facebook to show off.

END_OF_DOCUMENT_TOKEN_TO_BE_REPLACED

Late last week Facebook sent out invitations for an event at their headquarters teasing a “new home on Android.” As expected the internet is now filled with rumors about a new Facebook phone. While we still have a few days until the April 4th event, here are some of the latest and most interesting rumors about the Facebook phone and what else they might announce.

END_OF_DOCUMENT_TOKEN_TO_BE_REPLACED

So AT&T users– you’ve got an upgrade coming up sometime over the next couple of months and while you like some of the phones already out there, you really wanna know what AT&T has got planned during the next few weeks or months so you don’t go out and buy something now only to really regret it a week later. We’re here to help. With all the excitement around new phones like the BlackBerry Z10, Samsung Galaxy S4 and HTC One we figure now was a good time to wrap everything up.

So without further ado, here are 5 of the best new phones that either available now at AT&T or are coming soon. If you’re on AT&T and have an upgrade coming up this Spring these are some of the phones you’re going to want to take a look at.

END_OF_DOCUMENT_TOKEN_TO_BE_REPLACED

The HTC One– Everything You Need to Know

Yesterday in New York HTC took the wraps off of their latest and greatest phone, the HTC One. As you can see in the pic above this is one heck of a phone that not just looks great but has some really interesting features too.

The One will be available in March on AT&T, T-Mobile and Sprint, but before that time comes let’s get to what’s new here and why it matters to you.

END_OF_DOCUMENT_TOKEN_TO_BE_REPLACED

As expected, Verizon and HTC this announced their latest and greatest superphone, the Droid DNA. There were a lot of crazy rumors about this phone over the last few weeks, and well, it looks to live up to all of them.

At a size that is just slightly larger than the Samsung Galaxy S III, HTC and Verizon have seem to have packed in here everything you could want in a 2012 top of the line smartphone: a quad-core 1.5 GHZ processor with 2 GB of RAM (so everything runs fast and smooth on here), Android 4.1 Jelly Bean with the latest version of HTC Sense, an 8 megapixel back camera with a second 2.1 megapixel front camera for HD video chats, 16 GB of built-in storage (though unfortunately no microSD card slot for adding more), support for NFC (so you can do things like share pictures just by tapping phones) and wireless charging, built-in Beats Audio (with some updates so that your music will sound better even when playing at the maximum volume), and support for Verizon’s 4G LTE network. The greatest part about this phone however is the screen.

The Droid DNA packs an unbelievable 5 inch Full HD 1080p screen. As strongly rumored as this was, that it’s actually here is pretty insane. Basically, this has the same amount of pixels as the average 40-50 inch HDTV, but in this much smaller design. This means that anything and everything– games, pictures, books, Facebook updates, Tweets, text messages– will look absolutely amazing on here.

The Droid DNA will cost $200 when arrives in Verizon stores next Wednesday, November 21st. If you really can’t wait to make this your next phone, you can pre-order it now from Verizon’s site which as of this writing has a promised ship date of Monday, November 19th.