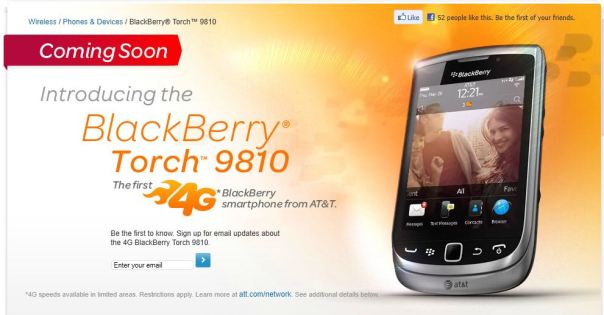 Since AT&T or RIM (the makers of BlackBerry) haven’t officially announced this yet we’re not 100% sure on all the new improvements the Torch 4G will have over the original Torch. We do though know that it will be much faster (thanks to a much more powerful 1.2 GHZ processor), record 720p HD video with its back camera (which means that it’s at least 5 megapixels), have 8 GB of built-in storage (with support for another 32 GB through microSD), run the latest and greatest BlackBerry 7 OS (like on the Bold Touch 9900. BlackBerry 7 features a ton of improvements like the latest BBM 6, better graphics and browser, and an improved touchscreen keyboard for when you don’t want to use that slide-out BlackBerry keyboard), and pack support for AT&T’s 4G HSPA+ network.

No word on price or an exact release date, but with BlackBerry hosting their Fan Night event in Toronto tonight (an event which was teased to be bringing new BlackBerrys last week), let’s hope that we’ll finally find out more very soon.

END_OF_DOCUMENT_TOKEN_TO_BE_REPLACED

We know a lot of you are very excited for the upcoming new Bold 9900/9930 (depending on of if your on AT&T/T-Mobile or Sprint/Verizon), but sadly ever since it was first announced in April RIM hasn’t said anything more such as when exactly we can expect it or some of the other rumored new BlackBerrys (like the new Torch, Curve or Storm). Well, looking at this latest tweet from BlackBerry we’ll hopefully have some of those answers soon. Like tomorrow soon.

The tweet, which you see above, is from the official BlackBerry Twitter account and teases some new info coming tomorrow on BlackBerry OS 7 devices (like that Bold Touch and new Torch, Curve and Storm!). And seeing as we already know a lot about OS 7 since it was announced back in April with the Bold Touch, hopefully these new “deets” will include some info on when exactly some of the new BlackBerrys will be in stores and for how much.

So BlackBerry fans stay tuned– it looks like the info you’ve all been waiting for will finally be revealed soon. And make sure to check back here tomorrow for whatever it is BlackBerry has to share.